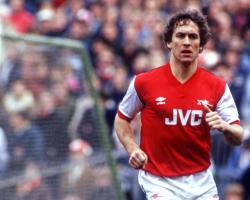 Sorry I can't be there tonight

I'm getting some long-term professional treatment and hopefully the next time you see me, I'll be in great shape

I had a lot of fun working on my life story DVD, so I hope you all enjoy it and have a great night

Thanks everyone." Sansom said in the events fundraising program.

Everyone at football.co.uk would like to wish Kenny all the best, and that we hope to see him fit and healthy again soon!

A full-back held in the highest regards at both international and club level, Sansom is best known for his time at Crystal Palace and Arsenal his adventurous playing style and is often compared to the modern attacking full-backs of today.

Sansom is, without a doubt, one of the finest left-backs to pull on an England shirt, earning 86 caps for the Three Lions over a 9 year period

Scoring a solitary goal during a 5-0 thrashing of Finland in October '84.

After being scouted by a number of London clubs, including Arsenal and Tottenham, Sansom signed for Crystal Palace in 1974

He also played a crucial role in Palace's promotion to the First Division in 1978/79.

Already an England regular, the defender signed for London rivals Arsenal in 1980, Making 394 appearances for the Gunners

Kenny's astute defending during his time at Highbury earned him the nickname 'Kenny White-Shorts', seldom diving into a rash challenge

In 1987 Samson and Arsenal edged Liverpool 2-1 at Wembley to lift the League Cup, his first and only piece of silverware in North London.

Kenny's time at Arsenal came to an end in '88 and continued to play for a number of years, with stints at Newcastle United, QPR, Coventry City, Everton Brentford, and Watford

A testament to Sansom's ability, he has appeared in a PFA Team of the Year on 11 occasions, more than any other player.