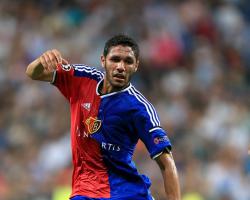 Here, we look at seven things you may not know about the potential Gunner.

While it is unlikely you would get it printed on your replica shirt, Elneny's full name is Mohamed Naser Elsayed Elneny.

And, talking of shirts, he will not be able to retain the number 33 jersey he sports for Basle as that is Petr Cech's squad number at the Emirates Stadium.

Elneny's first international goal for Egypt came on English soil at Leyton Orient's Matchroom Stadium - opening the scoring in the 2-2 friendly draw with Jamaica in June 2014.

The 23-year-old had already experienced football in the capital having played in all four of Egypt's matches at the London 2012 Olympic Games as Hany Ramzy's side reached the quarter-finals before losing 3-0 to Japan.

As well as having played in England, Elneny will be no stranger to Premier League clubs having facedTottenham, Liverpool and Chelsea for Basle in European competition in the last three years

He particularly shone in a 2-2 Europa League draw with Spurs in 2013, a quarter-final tie which the Swiss outfit won on penalties.

Having been deemed not got good enough for El Ahly, where he had played at several youth levels, Elneny's introduction to Egyptian league football came when he joined Cairo-based side Arab Contractors - known locally as El Mokawloon.

Despite being only 23, Elneny would bring more championship-winning experience to the Arsenal squad having lifted three successive Swiss Super League titles at Basle.