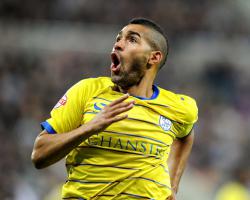 The Championship Owls piled on the problems for Steve McClaren's Magpies as Lewis McGugan scored the only goal of their third-round clash at St James' Park on Wednesday.

Arsenal, 2-1 winners over rivals Tottenham after two goals from Mathieu Flamini, will now head to South Yorkshire for a repeat of the 1993 final in the week commencing October 26.

Another Championship side, Middlesbrough, comfortable 3-0 winners over Wolves on Tuesday, will face a stiffer test against Manchester United at Old Trafford.

Hull, also of the Championship, will again face Premier League opposition following their victory over Swansea after being drawn against high-flying Leicester.

Everton will host Norwich and Southampton will take on Aston Villa.