Shkodran Mustafi on the verge of Arsenal move 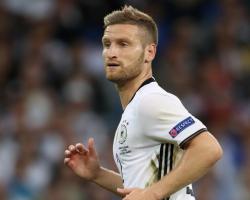 The 24-year-old has been a summer-long target for Arsenal boss Arsene Wenger, who confirmed during his press conference ahead of Saturday's trip to Watford that he was "99 per cent confident" of bringing in at least one more player before the transfer window closes.

Mustafi, who was part of the youth set-up at Everton earlier in his career without ever breaking into the first team, could command a fee in excess of ÃÂ£30million.

Having finally appeared to land one of his main summer targets, Wenger will hope the Germany international, who scored his first goal for his country in their 2-0 win over Ukraine at Euro 2016, will pass his medical which is believed to be scheduled for Friday afternoon.

Speaking on Friday morning before news of Mustafi's medical emerged, Wenger spoke of possible deals for both him and Deportivo La Coruna striker Lucas Perez.

''We are working on the deals

We are not close enough to announce today that they will sign for us, and will we sign anybody before the end of the transfer window? I am 99 per cent confident," he said.

''It was a strange transfer market

I expected it to be easier than ever, but it was more difficult than ever

Not a lot has happened.

''It looks like when you meet other clubs and you have an English passport, you hit these prices which are very difficult to understand compared to the quality of the players.

Everybody has sat on their pounds until now

We know they will all splash out now

I expect the next three days to be very, very busy, so be on alert."

Wenger had come in for plenty of criticism for failing to add to his ranks, although he had already signed midfielder Granit Xhaka from Borussia Monchengladbach for around ÃÂ£35million.

Arsenal also signed Bolton defender Rob Holding and young Japanese striker Takuma Asano - who it was announced on Friday has joined Stuttgart on loan for the season having been denied a work permit.

But Wenger failed in a high-profile bid to land Jamie Vardy from Leicester and the deal for Mustafi has been rumbling on for weeks.

Perez is a lesser-known quantity, but, having reportedly been close to completing a move to Everton, Wenger refuted the claim he was signing players now as a reaction to supporters' pressurising him into spending.

''I'm happy when our supporters are happy,'' he said.

''But my job is to make the right decisions

If that is exactly similar to the contract of the players and that maintains the supporters being happy, that is even better

I focus first on making the right decisions for the club."

With Asano loaned to Stuttgart and Joel Campbell departing on a similar deal to Sporting Lisbon earlier in the week, Wenger conceded he may also allow defender Calum Chambers to leave on loan to gain first-team experience.

''Future? No,'' he said when asked if Chambers' future would be affected by the signing of Mustafi, adding: ''The fact that he could go out somewhere and play? Yes.''