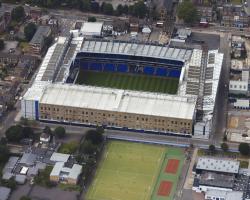 On Saturday afternoon, the two north London sides will go head to head at the Emirates Stadium, the Gunners' 60,000-seater home since 2006 for which the club continue to pay off at around Â£35million per year against a long-term fixed interest rate bond.

Spurs are pushing ahead with proposals to redevelop land around White Hart Lane to accommodate a new 56,250-capacity venue, but following legal challenges in the High Court could be set for a season of ground-sharing rather than being able to move for the 2017-18 campaign as planned.

Before then, Tottenham may well be the subject of a takeover, although American investment company Cain Hoy has said it is no longer considering making an offer.

Arsenal are only now starting to show the benefits of the switch from Highbury, having been able to keep hold of key men on new deals and also deliver multi-million pound signings like Mesut Ozil and Alexis Sanchez while also securing regular Champions League football.

If your competitors have more financial power than you, at some stage you have to make a decision.

"It looks like everybody makes this decision now, because when you look at Liverpool, Everton, (they) want to increase their capacity

West Ham go to a bigger stadium next season so if you stay in a smaller capacity, it is even more difficult."

Wenger added: "We built our stadium at a price that you couldn't afford it anymore and by subsidising it with our own resources, that is much more difficult today."

Wenger indicated he could deploy Ozil in a central role again on Saturday, the German having made such an impact in the 3-0 win at Aston Villa.

A much-changed Arsenal were beaten 2-1 at home by Southampton in the Capital One Cup on Tuesday night.

Wenger expects a response, adding: "It (beating Spurs) has a psychological impact on the confidence of the team."

The 23-year-old England winger missed the World Cup having undergone ankle surgery at the end of last season and is now facing stiff competition to regain a berth in the starting XI, but he is determined to be involved against Arsenal.

Townsend has yet to start a league game under Pochettino but has featured in two Europa League matches and was the star turn as Spurs came from behind to beat Nottingham Forest 3-1 in the third round of the Capital One Cup in midweek.

Having made 11 changes for that tie, Pochettino could give a number of the players who impressed a chance to line-up at the Emirates Stadium, with Tottenham having taken just one point from their last three Premier League outings.

Townsend, who has also suffered from a dead leg in recent weeks, hopes he can be one of those who can benefit from playing well in a different competition.

"I think I'm improving in every game," he said.

"Of course I'm not where I want to be at the moment but I'm getting games under my belt, I'm getting my fitness slowly better and with every game I'm improving so hopefully a few more games in the Europa League and the cup games and I might be ready to challenge for a Premier League spot.

"The manager's formation is new to me but I'm learning

It's going to take time but I know I can fit into this formation."

Pochettino has no fresh injury concerns

Ex-Arsenal man Emmanuel Adebayor, Christian Eriksen, Erik Lamela and Nacer Chadli are all likely to be recalled to the Spurs attacking line, with Kyle Walker the only noticeable absentee from the Spurs squad following abdominal surgery