Stay Or Go? Recapping Everyone Who Has Told Pierre-Emerick Aubameyang What to Do This Summer

The future of ​Arsenal striker Pierre-Emerick Aubameyang is going to dominate headlines this summer. Will he stay or will he go?

Barcelona have been heavily linked with the Gabon international, who will enter the final year of his contract at the end of the season, while Manchester United, Chelsea and Inter are all thought to be interested as well.

Nobody knows what's going on just yet, but people all over the world still love to have their say. Some have begged him to stay and others have urged him to go, and you can't go five minutes without seeing someone else chime in.

Here's a recap of everyone who has had something to say about Aubameyang.

"Get us in the Champions League and you can go for free." 👋

“I thought ​Pierre-Emerick Aubameyang would be about 31, 32 when he left, and if I was ​Arsenal I'd keep him in the summer," Merson told ​Sky Sports in February.

“I'd keep him and say, you know what, give him what you can next year and get us into the ​Champions League and you can go for free. It's hard to buy goals, and he's a natural scorer."

"Aubameyang is at an age now where he will play every week for Arsenal. If he goes to, say, ​Manchester United or somewhere else, four or five bad games and you are out of the team," he ​reiterated months later.

"He's going to play every week at Arsenal and when you are coming towards the end of your career, two or three years to go, you have got to enjoy your football and play.

"If I were Aubameyang's agent I would be stressing that he is at one of the best clubs in the world, a phenomenal football club that has as much chance as anybody, bar ​Manchester City and ​Liverpool, winning something. For me, I would stay." "I don't want to say that Arsenal aren't ambitious, but Arsenal don't have ambitions as high as some other clubs as far as Europe is concerned," Gabon FA president Pierre Alain Mounguengui told ESPN.

"So if Pierre could secure a contract with a more ambitious club, he'd definitely find his place there.

"If this was to happen, he’s going out there to sit on the bench,” former ​Chelsea midfielder Craig Burley said to ​ESPN.

“There’s already a problem at ​Barcelona where [Antoine] Griezmann has been moved out to the left to make room for [Luis] Suárez and [Lionel] Messi playing in behind.

“I’m not sure they would go for a player like that, although he’s a good goalscorer. I think for him, it wouldn’t be a great move. He’d be a bit-part player at Barcelona, right now with their squad.”

"If I’m Aubameyang, I’d be looking out the door because he’s a player that needs to be playing at the very, very top level," Cole told ​BT Sport.

“He can’t go now because Arsenal are on the way to building something strong,” Sagna insisted to ​Goal. “They can’t afford to lose him.

"If they have to pay him, then just pay him because if they want someone else of his quality they cost £150m. So don’t spend this £150m, just spend £50m and give it to him. It’s the same as van Persie and I think you have to learn from that situation.

“Auba deserves it. I’m not saying that because of his name or because he has scored a few goals. He’s the best striker in the league.” 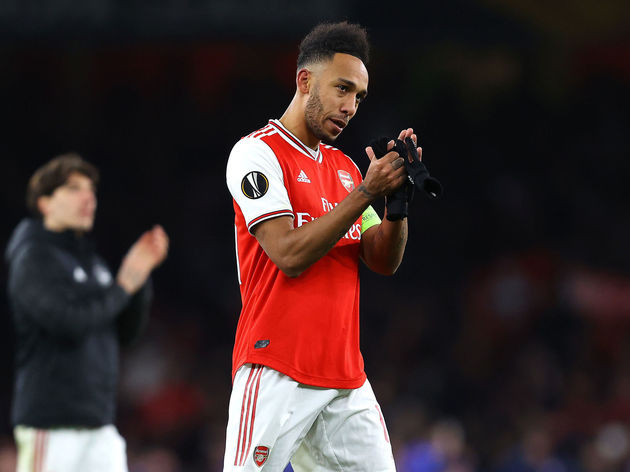 “Barcelona, they need a player, I would say, down that left-hand side that can join in with the other front players," former Arsenal midfielder Robson told ESPN (via ​The Express).

"We love you!!! This club loves you. Our fans love you," Wright wrote on Instagram (via ​The Sun).

"If you weren’t here with all due respect to the rest of our team we’d be in deep trouble. For you to score the amount of goals you are scoring whilst doing all that defending is just incredible!!!! (Please stay and sign the ting)."