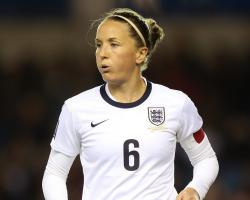 Stoney, 32, revealed in February that she is gay and is in a relationship with fellow player Megan Harris, and has since had to put up with a minority castigating her over her sexuality.

But she feels that is nothing when compared to what a male footballer would receive if he were to announce he was homosexual.

Former Aston Villa midfielder Thomas Hitzlsperger is one of the biggest names in the men's game to come out - but the Germany international left it until after his retirement to do so.

"People are still astonished that out of 92 Football League clubs, there's not a single gay male player but then I have to say, is that not society?" Stoney said in an interview with the Guardian.

"I think because there's so much put on it - there's no gay male player yet, no one's come out in the game - and there's so much media pressure, who would want to be that person?

"The male terraces are brutal

Male football terraces are so far behind society, it's unbelievable in terms of racist abuse, homophobic abuse.

"If you're playing in front of 60,000 people who are going to use anything to make you play badly any way, are you going to want to come out and talk about your private life.

"It's going to be a massive step for whoever does it

It will be a really positive step."