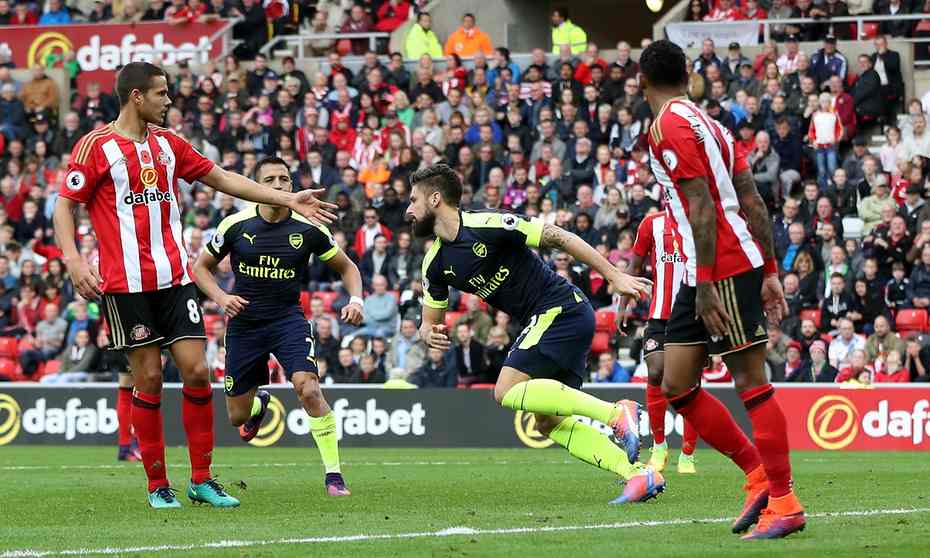 This followed a Sunderland penalty that had brought them back into the match.

Arsenal dominated the first half and would score midway through when Alexis snuck in and headed home Chamberlain’s cross. Ozil had a chance to seal the victory, but his lob over the goalie was not high enough and Sunderland stayed alive.

The game started to open up in the second half and Arsenal squandered several decent chances to extend their lead. They were punished when Watmore nicked the ball off a stumbling Mustafi and was fouled in the box by Cech.

Jermain Defoe converted the penalty and the game was on. Enter Olivier Giroud, making a rare appearance for the Gunners this season.

Giroud struck twice, the first a nifty finish off a Gibbs cross, the second a glancing header off an Ozil corner.

Sanchez scored his second, nudging the ball home amid the confusion in the Sunderland area after Gibbs had hit the upright.

It was a solid response to the Sunderland equalizer and Arsenal will move back to the top of the table.

Cech 5:  Very little to do for most of the match. Fouled Watmore and had little chance on the penalty.

Bellerin 7:  He had his way most of the match with the Sunderland defence. Combined well with the Ox and kept the wing under control.

Mustafi  5:  Was solid most of the day and he made several good long passes. Was at fault on the goal as he stumbled and allowed Watmore to break free.

Koscielny 7:  Largely kept Defoe from being a factor in the match.

Gibbs  8:  A decent match, but had to keep an eye on Khazri. A nice cross set up Giroud’s goal and he hit the upright in the lead up to Sanchez’s second goal.

Coquelin  7: A strong and combative performance. He broke free in the first half, but didn’t have the pace to go all the way and get a shot off.

Ozil  8:  He had a couple of chances as well, the best being the chance he had in the first half, but he didn’t lob the ball high enough. He assisted on Giroud’s second goal and he looked dangerous on a number of occasions.

Oxlade-Chamberlain 7:  A good game for the Ox. He had a fine assist on the opening goal with a great whipped in cross. He even showed some good defensive hustle, covering for Gibbs and making a timely tackle. He had several good chances to score in the second. The first he hit too early, the second he should’ve passed, and the third he probably should have shot. The results of these chances are best not mentioned.

Sanchez  8:  Man of the match. He was a handful for Sunderland the entire afternoon. His first goal was a beautiful header when he snuck in front of the defender. He should’ve been given a penalty when he was pulled down in the area, but Martin Atkinson ignored it. The last goal was the result of his quick thinking and opportunism in the area.

Iwobi  5:  A decent first half, but he could’ve done better with two shots he had at goal. He was a disaster in the second half, making a number of loose passes and playing some sleepy defence. Not sure what happened at halftime.

Giroud  8:  Scored on his first two touches after coming on. A great performance which should boost his confidence.

Ramsey 5:  His first minutes since the opening day match against Liverpool.