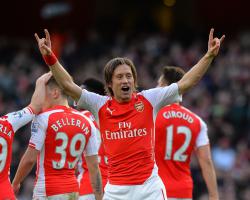 The 34-year-old, who agreed a contract extension at the end of last season, has been struggling with the problem since June following international duty with the Czech Republic.

Manager Arsene Wenger was set to give an update on the midfielder's fitness this week ahead of Sunday's Barclays Premier League trip to Crystal Palace.

However, Rosicky's agent confirmed to website fotbal.idnes.cz the player had now had "arthroscopic knee surgery", but it is understood any projected recovery time is yet to be determined.

Arsenal lost their opening game of the new Barclays Premier League season 2-0 at home to West Ham last Sunday and are also without midfielder Jack Wilshere because of an ankle injury.