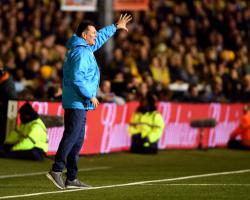 The Vanarama National League outfit could not pull off another shock and set up a quarter-final clash with fellow non-leaguers Lincoln as a strong Gunners side ran out 2-0 winners on the plastic pitch at Gander Green Lane.

Lucas Perez gave the visitors the lead in the first half before Theo Walcott, captaining his side, wrapped up the victory after the interval with his 100th goal for the club.

While not at their best, the result gets Arsene Wenger's men back to winning ways following a heavy defeat at Bayern Munich last week.

Sutton, who sit 17th in the National League, lost to Guiseley in their preceding match but now Doswell wants to look to the future, insisting plenty of the revenue from the cup run will go on improving their 5,000-seater stadium.

Asked what the club will take from a cup run that included beating 1972 winners Leeds, he said: "We take away a legacy for the club that allows them to put right all what needs to be put right.

"We have to be safe in league to have a good season and then will reflect in the summer as one of the best seasons I could ever have.

The reality is it could take a week to get everyone back to ground level.

We will buy new dressing rooms, classrooms and all-new toilets - everything that you want your house to look like, we will put our house in order

It won't be spent on players."

Twelve-time winners Arsenal now welcome Lincoln to the Emirates Stadium next month and will be heavy favourites to advance into a Wembley semi-final.

But Wenger will not be taking anything for granted having been impressed by Sutton's efforts on Monday.

Asked if was a case of job done, he replied: "Yes, against a side that was astonishing.

I will never go down there (to manage) because it is too difficult.

"(I was surprised) by the speed of their game

We had to keep our focus, I must give credit to the players who were professional and kept their focus.

"If we had come here in a relaxed mood we would have gone out because they produced quality.

"We could not afford a light team selection and that is why I came with basically all the players who were available because we couldn't afford to go out, we can never afford it."