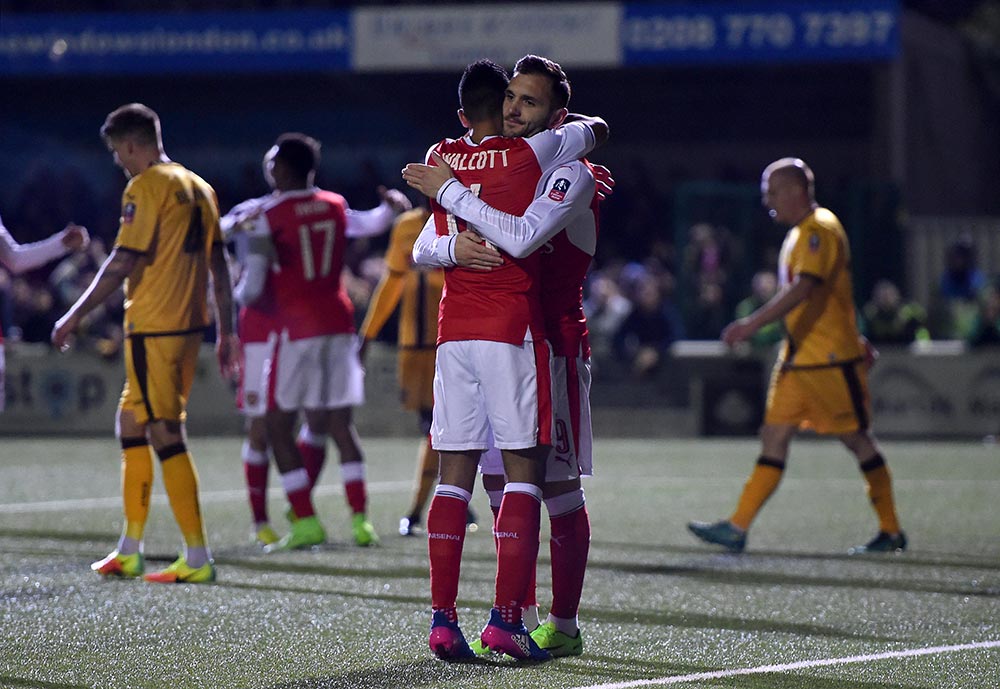 Clearly we were expected to win this one, but on recent form it was never going to be a walkover - and it wasn't.

Sutton played with the fire and passion that's missing in our team at the moment, whilst we went through the motions in unspectacular fashion - no cohesion or pattern to our play at all.

It was one of those games that sutton and their fans will remember for all the right reasons, but it was eminently forgettable in terms of Arsenal's performance.

This win is a stay of execution for Wenger, and I don't see the pressure on him easing one bit as a result of this result.

Now we have Liverpool away and Bayern at home to contend with. The real world.

Having been thrashed at Bayern Munich in the Champions League last week, the humble setting for this win was in stark contrast.

With pressure mounting on Arsene Wenger, the Gunners boss needed to avoid the largest of banana skins against their non-league hosts, and goals from Lucas Perez and Theo Walcott assured an easier night for the Frenchman.

Another fifth-tier opponent now awaits in the last eight as Lincoln visit the Emirates Stadium.

The recalled Walcott was wearing the captain's armband as he led a strong side named by Wenger.

Big-money summer recruits Shkodran Mustafi, Granit Xhaka and Perez were all included while Alexis Sanchez came off the bench.

Sutton had upset Leeds here in round four and their artificial pitch was heavily watered before kick-off.

The strange surface could have played some part in Arsenal's slow start to the tie, with the Vanarama National League side matching them early on.

Ex-Arsenal youngster Craig Eastmond wanted a penalty after skipping past Nacho Monreal with ease, but referee Michael Oliver was unmoved.

The 12-time winners were ahead soon after as Xhaka's raking pass found Perez on the flank. The 28-year-old cut inside to arrow a low drive past the despairing dive of Ross Worner in the Sutton goal.

Walcott whistled a long-range strike over the bar with Alex Iwobi having a shot turned behind by Worner as Arsenal countered at speed.

Sutton were presented with a great chance to level on the stroke of half-time but Adam May shot wide having been gifted possession by Arsenal goalkeeper David Ospina.

Bedsente Gomis had an opportunity to test the Colombian early in the second half but wanted too much space and eventually his shot was charged down.

Shortly afterwards Walcott hit the second goal, finishing at the far post for his 100th Arsenal goal after Monreal and Iwobi combined down the left.

Sutton's moment to remember almost came with a little over half an hour to go as another former Gunner, Roarie Deacon, rattled the crossbar with a dipping effort from 25 yards.

Wenger clearly felt the tie was not completely sewn up as he turned to Sanchez with 20 minutes remaining, but the Chilean was not required to produce any heroics with Sutton's challenge dwindling as fatigue set in.

It was not a convincing performance from the visitors, who sit 105 positions above their hosts in the football pyramid, but for Wenger this was respite after a fortnight which saw his hopes of winning the Premier League or the Champions League all but ended.