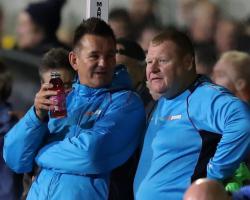 The 46-year-old, known as the 'roly-poly goalie', pulled off the publicity stunt on behalf of a bookmaking company after all three substitutions had been made, but the actions of the 20st Shaw did not seem to impress the club's hierarchy.

But Wayne is a top man

"I didn't know anything about it

He has got himself in the papers again and the fame obviously has gone to his head a little bit, but we will soon bring him back down to earth, don't worry about that."

A bookmaker had offered a price of 8-1 to Shaw eating a pie "live on air" during the match, but Shaw denied that he or any of his team-mates had placed a bet

Speaking to the Independent, Shaw said: "A few of the lads said to me earlier on, 'What is going on with the 8-1 about eating a pie?' I said, 'I don't know, I've eaten nothing all day, so I might give it a go later on'."

"As I say what is that? Sun Bets had us at 8-1 to eat a pie? I thought I would give them a bit of banter and let's do it

Manager Paul Doswell, who also employs Shaw as part of his coaching team, said: "Wayne has become a global superstar on the back of being 20st

It wouldn't surprise me

I don't think it shows us in the best light."