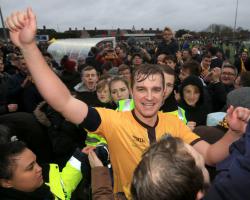 Paul Doswell's side, who sit 16th in the Vanarama National League, knocked out Sky Bet Championship side Leeds 1-0 at Gander Green Lane on Sunday and were rewarded with a glamour tie against the Gunners

The match will be shown live on BBC One on Monday February 20, with kick-off at 7:55pm

Meanwhile, the Imps - the current leaders of the National League - put out Championship promotion-chasers Brighton in round four, having disposed of Ipswich following a replay at Sincil Bank

Their fifth-round tie against the Clarets at Turf Moor will be broadcast by BT Sport at 12:30pm on Saturday February 18 to start the weekend's live coverage

Wolves' reward for winning at Liverpool was a home game against Premier League leaders Chelsea, which will be on BT Sport on February 18, kick off at 5:30pm

The other live fixtures see Fulham take on Tottenham at Craven Cottage, on BBC One on Sunday February 19 at 2pm, with Blackburn against Manchester United broadcast on BT Sport at 4:15pm - the 57th straight United FA Cup clash to be broadcast live