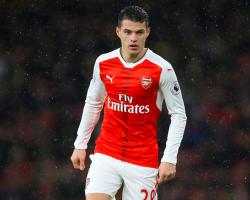 The 32-year-old defender will remain at the Emirates Stadium until 2018 at the earliest after the club took up the option to extend his deal, which was due to expire at the end of the campaign.

Mertesacker was named captain after Mikel Arteta retired but is yet to feature this season after undergoing surgery on a serious knee injury suffered in a July friendly against Lens.

Despite that, Gunners boss Arsene Wenger has opted to keep the Germany international at the club

And Xhaka, who has not played alongside Mertesacker since arriving in north London in the summer, has been impressed with his presence in the dressing room.

"Unfortunately I have not had the chance to train with Per since I arrived here, actually," he said.

"Straight away, I noticed his importance in the dressing room because he is a real leader here and hopefully he can get back healthy and we can have him for the second half of the season."

Mertesacker, who is likely to be back within weeks and is currently training on his own to improve his fitness, follows in the footsteps of French trio Laurent Koscielny, Francis Coquelin and Olivier Giroud in landing new deals at the club.

Much has been made about the number of players closing in on the last 18 months of their contracts at Arsenal, and Xhaka feels the combination of getting people fit and tying them down to longer deals is imperative.

"It is so important for us because this is a really big phase of our season," he said.

Of course, the contracts are a positive both for the players and the club as well."

The two big-name players yet to pen fresh terms are Alexis Sanchez and Mesut Ozil, with Wenger offering no update on the apparent impasse over the duo's proposed new contracts.

The pair both have 18 months remaining and are believed to be seeking parity with the Premier League's top players to sign.

Xhaka believes Sanchez, who was visibly frustrated after being substituted during Arsenal's 4-0 win over Swansea last weekend, is the perfect example of how a player should approach the game.

"Alexis Sanchez can be a really big role model," he said.

"The reason is that he always goes to his absolute limit in both training and in the game, I think that attitude and application is something that any players can take something from."

Arsenal face Burnley at home on Sunday, with their FA Cup fourth-round trip to Southampton coming before the league visit of Watford.

That is followed by a tough trip to Chelsea, and Switzerland international Xhaka admits the next three Premier League outings could define Arsenal's season.

"I think firstly it was important to win at Swansea and the way we did with the 4-0 win there," he added.

"Then we have the two home games coming up against Burnley and Watford.

"To be honest, I see it in the same way as the boss - these next three games could really tell a lot about what direction we are going to go in this season."