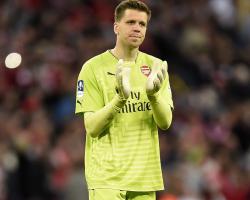 Wenger has only played the Pole in the cup competitions after catching him smoking in the showers following Arsenal's 2-0 defeat at Southampton on New Year's Day.

Szczesny's father Maciej, himself a former Poland goalkeeper, accused Wenger of being disloyal towards his son earlier this year and claimed the smoking story was "exaggerated" by the media.

He also said Arsenal's defence was to blame for a number of goals they have conceded this season and singled out Per Mertesacker as a guilty party, claiming the German World Cup winner had "the agility of a rhinoceros" in an interview with Polish newspaper Przeglad Sportowy.

The Gunners goalkeeper was so angry about the comments that he felt moved to publish a response on his Facebook page on Friday.

"Really shouldn't be dealing with this one day before the cup final but my father leaves me no choice," the Arsenal goalkeeper wrote.

"I have not spoken to him in more than 2 years and just like everybody else I have had enough of his idiotic comments about The Football Club and The Manager I owe so much to!

"Therefore please do not consider his comments as my shared view.

"Thank You for your understanding!"