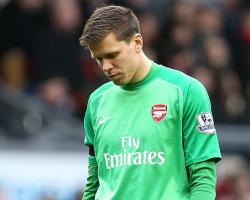 The Gunners conceded after just 52 seconds and were 4-0 down inside 20 minutes after two goals from defender Martin Skrtel and one apiece from Raheem Sterling and Daniel Sturridge.

Sterling added his second just after half-time and Mikel Arteta's later penalty was no consolation for the side who began the weekend as Barclays Premier League leaders.

"That was f***ing embarrassing," wrote Szczesny - who also conceded six at Manchester City in December - on his official Facebook page.

"Apologies to anyone who sat through 90mins of that game."

Manager Arsene Wenger was less blunt but just as forthright on his side's performance, and he knows there needs to be a big improvement for Wednesday's match against Manchester United at the Emirates Stadium.

"What is important is that we respond to that result, especially respond with a different performance because our performance overall was poor," Wenger said.

"On the concentration level, on pace, on defensive stability, it was very poor and we always looked vulnerable.

"If you concede two early goals from set-pieces then you are in a position where you always have to come out.

We know that you need to be better focused at this kind of level.

"Overall our performance was just not good enough and I include myself in that performance.

"For me it is maybe better I don't talk too much, go home and respond better on Wednesday night.

They were the best team today and we were very poor - only our fans were good for 90 minutes."