Szczesny in line for Roma loan 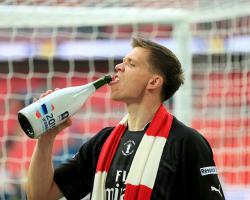 The 25-year-old played in the FA Cup final win over Aston Villa at Wembley, but lost his place in the Gunners' Barclays Premier League side to David Ospina at the turn of the year following some inconsistent performances and being fined for smoking in the showers after the defeat at Southampton.

Following the arrival of veteran Petr Cech from Chelsea, the Poland international appears set to get the chance of some regular match action with the Italian club.

Szczesny, though, remains committed to Arsenal for the long term and intent on proving himself the number one again.

Arsenal manager Arsene Wenger will continue to monitor transfer targets ahead of the deadline, with the likes of Real Madrid's Karim Benzema and Borussia Dortmund's P ierre-Emerick Aubameyang said to be on the radar

Midfielder Mathieu Flamini, meanwhile, is expected to leave for Galatasaray.