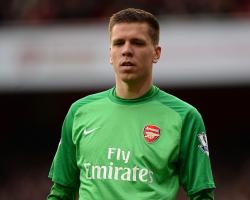 The Gunners moved two points clear of City, who host third-placed Chelsea on Monday night, with a 2-0 victory over Crystal Palace at the Emirates Stadium in a match where they had to be patient to eventually break down what was a determined defensive display from the visitors with a second-half brace from Alex Oxlade-Chamberlain.

Since shipping six at City on December 14, Arsenal's defence has been breached just four times - with Arsene Wenger's men registering seven clean sheets from those 10 matches in all competitions.

Much of that has been down to a settled back four and the growing central defensive partnership between Laurent Koscielny and Per Mertesacker.

Poland international Szczesny feels the growing understanding through the Arsenal rearguard could yet prove decisive.

"Our defensive record, especially at home, has been fantastic and we know that if we keep clean sheets we have got every chance of winning the game," said Szczesny, who made a smart save from point-blank range to deny Cameron Jerome what would have been an equaliser.

"We read each other and it is a very good understanding that we have."

Szczesny continued: "We realise that if you want to win the championship then you have to be solid defensively and that is the most important thing.

"We know that clean sheets give you the best platform to go on and win games so if we can keep a few more until the end of the season then we can get our rewards."

Arsenal travel to Liverpool on Saturday before hosting Manchester United and then tackling the Reds again in the FA Cup fifth round ahead of their Champions League last-16 first-leg meeting with Bayern Munich.

Defender Koscielny maintains Arsenal will be ready for the challenges ahead.

"February is a very important for us, but the season is long and the other teams will play against the teams who try to win the league so it's a long (season) and too early to say if we can win the title," Koscielny said on Arsenal Player.

"It's the team who will be the most consistent in the league (that will win it).

"We will see, but February and March will be very important for us."

Midfielder Mathieu Flamini will not be available for another two matches after starting a suspension on Sunday, although Jack Wilshere should recover from his ankle injury to play at Anfield.

With Aaron Ramsey still sidelined by a thigh problem, Wenger conceded it was far from ideal to learn deadline day loan signing Kim Kallstrom is expected to need around six weeks to recover from a micro-fracture in his back.

Palace, meanwhile, must regroup for their battle to stay up, and are now just a point ahead of 18th-placed West Ham.

Tony Pulis' squad will be bolstered by several deadline day signings, including Tom Ince from Blackpool.

Forward Marouane Chamakh, sold by Arsenal in the summer, said: "It was really hard for us in the end, but we learned a lot and are ready for the next game against West Brom.

"The new players can be good for the team because we can be stronger and there is more choice for the coach."