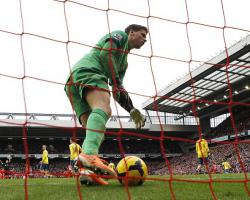 Although Arsene Wenger's men were unable to return to the top of the Barclays Premier League on Wednesday night, they at least restored some steel to a rearguard breached five times at Liverpool with a goalless draw against Manchester United.

And goalkeeper Szczesny insists there will be no repeat performance from Brendan Rodgers' side, who had raced into a 4-0 lead inside 20 minutes at Anfield on Saturday.

"It will be a big game for us because we conceded five against them and it was a little bit humiliating," said Szczesny, who posted a personal apology to Gunners fans on Facebook following the defeat.

"We want to recover as soon as possible and it is a good chance that we play them a week afterwards.

"I would like to say it was a one-off, but there were two of them [heavy defeats, the other coming in a 6-3 reverse to Manchester City] this season.

"It was just an accident, it happened

Liverpool were terrific offensively, we were a little bit weak defensively and got punished.

"I certainly believe it is out of our system now because we turned up against United with a good defensive show."

Szczesny added: "You can't say you saw the real Arsenal at Anfield, you have to judge us over a longer period of time.

"People have seen the real Arsenal over the last year

We conceded five on Saturday, but our defensive record over the last year or so has been amazing.

"You saw that against United, we didn't concede against a top side with fantastic strikers and we hope to do that against Liverpool."

Arsenal's failure to beat United, coupled with Manchester City's home game against Sunderland being postponed because of bad weather, leaves Chelsea top by a point.

Liverpool secured a dramatic 3-2 win at Fulham with a last-minute penalty and are now just four behind the leaders.

Szczesny feels this season's title race is developing into a fascinating battle.

"It will be tight

It makes it more exciting, every game seems that little bit more important, especially in the games between the top four," he said.

"It will be a very good end to the season

I am not surprised it is this close because there are a lot of quality teams.

"If we have a similar last 10 games like we did last year, we will be in a very good position.

"We are still near the top of the table and will give it a go to push for the title - we are still confident."

While Wenger accepts the draw with United was something of a "missed opportunity", the Gunners boss believes the response was just what was needed following such a morale-sapping reverse five days earlier and ahead of next week's Champions League showdown with Bayern Munich.

"Let's say it was a disappointing result against a good team, but the attitude of the players, the fighting spirit, was very reassuring," Wenger said on Arsenal Player.

"We have come back with better confidence now, now it is important to get wins again."

Arsenal midfielder Mathieu Flamini is set to be available for the FA Cup tie following a three-match suspension, which will come as a welcome boost with Aaron Ramsey still sidelined by a thigh problem and Kim Kallstrom continuing his recovery from a micro-fracture in his back.