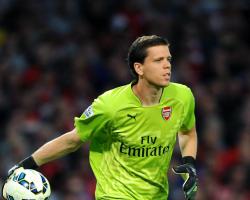 The 25-year-old Poland international was limited to 17 Barclays Premier League appearances for the Gunners last season, with David Ospina gradually wresting control of the gloves at the Emirates Stadium, and the arrival of Petr Cech from Chelsea has increased competition further.

Szczesny told asroma.it: "I've come here to win matches and trophies with Roma and I think the team are strong enough to do that

"I already know the faces and the names of my new team-mates and I'm hoping to get settled here quickly."

Szczesny, who lost his place to Colombia stopper Ospina shortly after shipping two goals in a 2-0 defeat at Southampton on New Year's Day, also hit the headlines for reportedly smoking in the showers after that game.

"I personally rate him highly - you do not take a boy and put him in the first team at the age of 20," he said last week, before the loan was confirmed.

"He already has huge experience

I don't want that experience at such a young age to be wasted."

However, the capture of Champions League-winning Cech following his 11 successful years at Chelsea meant Szczesny was unlikely to have much hope of reclaiming the number one jersey this coming season

Wenger added: "How much can he grow with Petr Cech next to him, who is happy to share his huge experience, and how much mentally will he be able to live with the fact that he doesn't play regularly?

"It is a position that, if you are number two or three, it is more difficult."

Szczesny will compete for a spot between the sticks at the Stadio Olimpico with former Italy international Morgan De Sanctis, while veteran Romanian keeper Bogdan Lobont is also part of the Giallorossi squad.

Roma have twice finished as runners-up to Juventus under head coach Rudi Garcia - last season began with a run of five straight league victories but ended with the Bianconeri sitting 17 points clear at the top of the table.