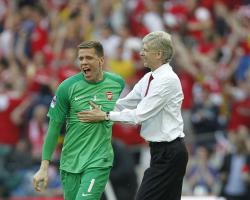 Wenger has spoken out against the habit in the past, with England midfielder Jack Wilshere having been pictured smoking on two separate occasions

But the Frenchman will still consider Szczesny, who was at fault for both the goals conceded at St Mary's on New Year's Day, for Sunday's clash with Stoke after the Poland international sat out of the FA Cup third-round victory over Hull as David Ospina deputised.

"I haven't selected the first XI yet

I take everything into account," Wenger replied when asked if Szczesny would return.

"Of course (he has apologised)

He is a serious boy who works very hard, he doesn't need all that

He made a mistake, he is not the first one or the last one.

"You can do what you want at home

You have a freedom

Ideally, the best way to have a high level as possible is to behave as close to the rules."

Szczesny's father came out in defence of his son on Thursday, pointing the finger at the rest of the Arsenal defence for the goals conceded at Southampton.

But Wenger dismissed any criticisms and does not believe the actions of Szczesny have damaged the image of the club.

"Ideally, you want everyone to behave in the perfect way

I like him as a person, when he makes a mistake he stands up for it

He has contributed a lot to the good image of Arsenal Football Club.

"I don't need to make a big fuss of it

I don't want to talk more about it