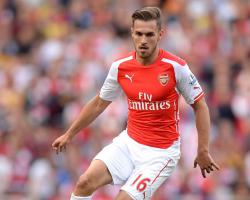 The Gunners were stretched by Slaven Bilic's well-drilled outfit, who almost took the lead right from kick-off at the Ataturk Olympic Stadium through a long-range effort by former Chelsea striker Demba Ba.

However, the visitors held out and - but for some poor finishing by Olivier Giroud - could have netted an away goal, with substitute Alex Oxlade-Chamberlain seeing his shot touched onto the post in the closing stages.

Ramsey, who scored a stoppage-time winner against Crystal Palace on the opening day of the Barclays Premier League season, was dismissed for a second yellow card with 10 minutes left.

Arsenal, though, will welcome back Germany World Cup-winning trio Mesut Ozil, Per Mertesacker and Lukas Podolski ahead of next week's second leg at the Emirates Stadium, when they will be out to secure a remarkable 17th successive campaign in the lucrative group stages of Europe's elite club competition.

It had, however, almost been a nightmare start for the English side.

After the ball was rolled from kick-off, Ba sent an audacious effort looping towards the top corner, which Wojciech Szczesny clawed up onto the crossbar.

Besiktas may technically have been playing away, with their Vodafone Arena home being redeveloped, but you would not have known it given the ferocity of the Turkish fans, with deafening whistling greeting every touch by a player in a red shirt.

On nine minutes, a deep cross from Mustafa Pektemek on the right was volleyed back towards goal by Ba, but again Szczesny made a good save.

Arsenal suddenly broke down the right through Alexis Sanchez, and his cross was hooked goalwards by Giroud as he fell, but blocked inside the six-yard box and the France striker could not hook the rebound in.

The Gunners won 3-0 across the Bosphorus against Fenerbahce at the same stage the Champions League play-off last year and, af ter weathering the early onslaught, began to get a spell of possession

Bilic, the Croatian former West Ham and Everton defender, continued to prowl his technical area - which was across some eight lanes of running track around the perimeter of a pitch more suited to field events than a qualifier for top-level European competition.

On 39 minutes, Arsenal midfielder Jack Wilshere found himself in space on the edge of the Turks' penalty area, and, with Sanchez in space out to the right, tried to chip Tolga Zengin, who dived to make an acrobatic save.

Besiktas should have scored just before half-time.

A long ball forwards down the left was missed by Calum Chambers, the teenager signed from Southampton who had been playing very well, and Ba skipped clear towards the penalty area.

However, the striker, who scored a hat-trick in the last round against Feyenoord, dragged his low shot wide of the left post.

Arsenal then could have stolen the lead themselves, as a one-two with Wilshere put Giroud free in a central position, but he could not make contact and the ball rolled through to the goalkeeper.

Besiktas created another good opening at the start of the second half, as Olcay Sahan cut in from the left only to curl his effort wide of the far post having done all of the hard work.

Arsenal were forced into a change on 50 minutes when captain Mikel Arteta looked to have turned his ankle and was replaced by Mathieu Flamini, who was quickly booked for a foul on Veli Kavlak

Right-back Mathieu Debuchy got behind the Besiktas defence and cut the ball through towards Giroud on the penalty spot, but once more the France striker could not make good contact.

Santi Cazorla struck a low effort goalwards which the keeper gathered at the second attempt.

Arsenal were reduced to 10 men on 80 minutes after Ramsey collected a second yellow card for pulling back Oguzhan Ozyakup, the former Gunners midfielder, and will now miss the return leg.

The visitors almost snatched victory when Oxlade-Chamberlain, on for Sanchez, cut in from the right and drilled the ball goalwards, but Zengin touched it onto the post at full stretch.

Bilic was sent to the stands just before the final whistle, knowing there will be all to play for in north London next week.