When a player signs at Arsenal Football Club, they know they're signing for one of the most storied clubs in England; the Gunners breed iconic players who become synonymous with certain numbers the world over.

Now, the number eight might prompt thoughts of Steven Gerrard or Frank Lampard, but Arsenal have had some terrific footballers to don the shirt over the years. An often overlooked number on the red side of north London, fans on the North Bank have been spoilt with some outstanding players. A controversial decision given the lack of respect Samir showed the club during and subsequently after his departure. However, during his time at the club, Nasri was one of the Premier League's elite players - as illustrated by Manchester City's clumsy pursuit of the player.

If you need to see the quality that the Frenchman had when at the club, look no further than his Puskás Award-winning goal against Porto in the Champions League.

His play with Cesc Fabregas in the 2007/08 season made Arsenal credible title challengers until that fateful day in February where Martin Taylor broke Eduardo's leg, Gaël Clichy gave away a last-minute penalty and William Gallas cried on the pitch after the final whistle.

Nasri was a joy to watch during his three years at the Emirates, but putting him on this list is kind of like changing the sheets. I don't want to do it but I have to. Signed after the 8-2 blood bath at Old Trafford, Mikel Arteta brought steady performances to a very shaky Arsenal side. As with the side he now manages, Arteta brought a calm and assured attitude that allowed the club to continually reach the Champions League during his Arsenal career.

The relationship was mutually beneficial; in 2014 Arteta captained the side in the FA Cup final to win his first major honour, simultaneously ending the club's drought of nine years without a trophy.

Arteta's style wasn't as box-to-box as he'd previously displayed at Everton, but the Spaniard had key positional understanding and a solid range of passing to add consistency to a side that possessed enigmas such as André Santos. A classy player - get well soon Mikel. The tough-tackling midfielder ​might not be the most memorable name to non-Arsenal fans, but he was vitally important to the two title-winning sides in 1989 and 1991. His role set a block that allowed creative players like Paul Merson and David Rocastle to play.

Arsenal would nab a lead that would be defended by the impenetrable backline of Adams, Dixon, Bould and Winterburn, protected by Davis. Davis' best years occurred early on but the loyal number eight played 447 times and won When Arsenal signed Alan Sunderland from Wolverhampton Wanderers for £220,000, the player had just led Wolves to the Second Division title while playing some of his best football.

Sunderland had a good career, playing 206 times for the Gunners, but the 1979 FA Cup final was his crowning moment.

Arsenal had lost the previous final to Ipswich, but revenge would follow very quickly in what is considered one of the greatest FA Cup finals ever. Arsenal were leading Manchester United 2-0 with five minutes to go but managed to throw away their lead to allow the Red Devils to take the game to extra-time.

In the added minutes, Sunderland etched himself in Arsenal folklore. Graham Rix swung in a cross from the left that was misjudged by the United keeper and Sunderland dived in to tap home the winner. His celebration, arms aloft, screaming to the heavens, made the moment eternal. Back in the 60s and 70s, assigned numbers were​ not a reality. ​So often drawing the ire of Arsenal fans in the past, now every fan would have Aaron Ramsey back in an instant. If he's good enough for Cristiano, he's good enough for the Emirates. For Ramsey to play 11 years for the Gunners and ultimately leave for free to regularly sit on the bench at one of Europe's best clubs feels hollow. Aaron deserved better.

Ramsey suffered an injury that was felt by everyone at the club, and to see where he finished his Arsenal career is remarkable. Had he stayed, Ramsey would have certainly finished his career as one of the top appearance-makers for the club.

The Welshman provided so many brilliant memories in the red and white, including his 45-yarder against Fenebahçe, his brilliant 2014 ​Premier League season and his two FA Cup final-winning goals. Seeing Ramsey play in Italy is a pain that cuts deep. Given how little Arsenal fans sing, if you've got an iconic chant about you, it means a lot. Freddie's red hair was rightfully sung about at Highbury for nine years, as Ljungberg created his legacy.

The enduring image will be the Swede's late runs across the defensive line, that Bergkamp would undoubtedly find. The 2001/02 double-winning season was his year, netting 17 goals that campaign as he filled in for Robert Pires, whose brilliant season had ended early due to a knee injury.

One of Arsène Wenger's best signings, Ljungberg was the man for the big occasion - Freddie loved scoring against United at the peak of the rivalry and his goal against Chelsea in the FA Cup final is an enduring image. 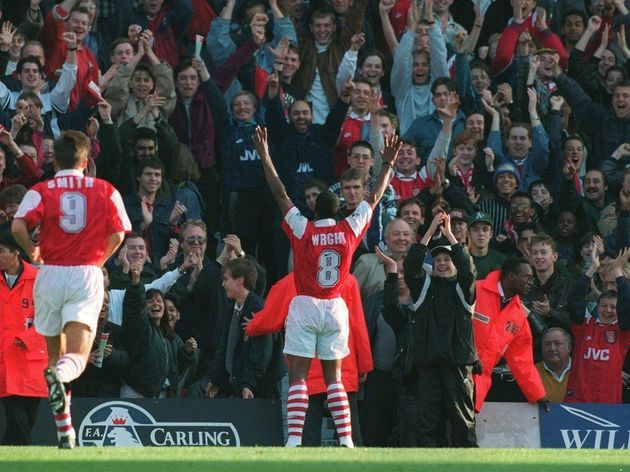 Saving the best for last, Ian Wright makes every Arsenal fan smile. He joined the club at 28 and left at 34, having scored 185 goals in seven seasons.

During his time, he thrilled the Arsenal fans with all manner of goalscoring and had a personality that resonated with Gunners' fans.

Pace, finesse and guile - Ian Wright was criminally robbed of more England caps but showcased elite international play. The joy that he still exudes for the club makes his legend grow and especially in these secluded times, YouTube allows fans to reconnect with his brilliance regularly.