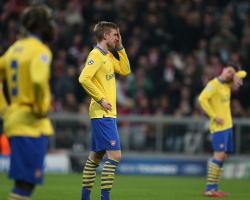 Arsenal fans can be forgiven for thinking itÃâs Groundhog Day again when the draw for the group stages of the Champions League was announced yesterday (27.8.15)

The Gunners have drawn their nemesis Bayern Munich, along with Greek Champions Olympiacos and the CroatianÃâs Dinamo Zagreb; there will be no room for slip-ups if they are to progress to the last 16.

They play exciting football, score plenty of goals, they have world class footballers and their fans are some of the best to have ever visited the Emirates

Yes, our fans will point to the fact that we came close to overturning a 2-goal deficit a couple of years ago but in truth the tie was lost in that first leg when Vermaelen had his worst ever game in an Arsenal shirt (a performance in which many GoonersÃâ believe he never recovered from.

Arsene played him out of position in that game)

Interestingly, Arsenal have not lost to the Germans in their two visits to the Allianz Arena, but it could be said these were effectively dead rubbers

The Gunners seem to have a knack for glorious failure

In 2010-11 they were battered 4-0 in Italy by Milan in the last 16 and then played brilliantly at home winning 3-0, almost overturning the deficit

The following year they lost to Bayern painfully on the away goals rule, but as I already said the game was a dead rubber in the second leg

The 1-1 draw in Munich was irrelevant

Evidently so did the players as they put in one of their worst performances ever in the Champions League, losing 3-1 at home again leaving themselves a mountain to climb

It was the fifth straight year that Arsenal had failed to make the last 16.

Arsene will believe that his Arsenal can top the group

I also believe that Arsenal can top the group, but they wonÃât as the tendency to self-implode will more than likely engulf the Arsenal team

I really hope the boys prove me wrong

Olympiacos wonÃât mind playing the Gunners as they have beaten them on their last three occasions on home soil.Arsenal have competed in the Champions League every year since they won the domestic double back in 97-98, which in itself is a fantastic record

They reached the final in 2006 and with a Sol Campbell goal they were only 14 minutes from a famous victory over Barcelona, having played with 10 men since the 18th minute, until EtoÃâo and Belletti scored twice in four desperate minutes

How far do you think Arsenal will go in this yearÃâs Champions League competition?

Writer Fevzi Hussein can be followed on Twitter @fevzihussein.