The Greatest Meaningless Goals Scored in the Last 30 Years

​Not all goals are created equal.

As much as all strikers like to trot out the old adage 'they all count the same', that is a lie. They are lying. They are liars. Scoring in the dying minutes to make it 7-0 carries only a fraction of the significance that a winning strike does.

Equally, pulling one back to reduce a massive deficit may make the scoreline more flattering, but it doesn't change the number of points your side wins.

Inevitably, sometimes these 'meaningless' goals happen to be converted in extraordinary fashion. These gems either get lost in the fog of time because of their insignificance or, more interestingly, the circumstances surrounding the goal get brushed aside due to its the overriding aesthetics of the strike.

The Moroccan nutmeg specialist has ​reinvented himself as a player with some semblance of tactical discipline in recent years but back in 2012 Taarabt was at his mercurial best for QPR against West Ham.

Sticking to his manager's mandate of remaining in the opposition's half or face a fine, this was Taarabt's first goal of the season and came when QPR were 2-0 down. It proved to be the last goal of the game as Taarabt and the Rs endured a bleak campaign, winning just four league matches all season.

Phelan netted this mazy effort in the 88th minute of an FA Cup quarter-final against Tottenham to reduce the deficit from three goals to two, as ​Manchester City limped out of the competition with a 4-2 loss at home.

Tottenham's Nayim scored a hat-trick that day, a man famous for one spectacular goal in the final of the 1995 Cup Winners' Cup against his former north London rivals. That one was anything but meaningless. 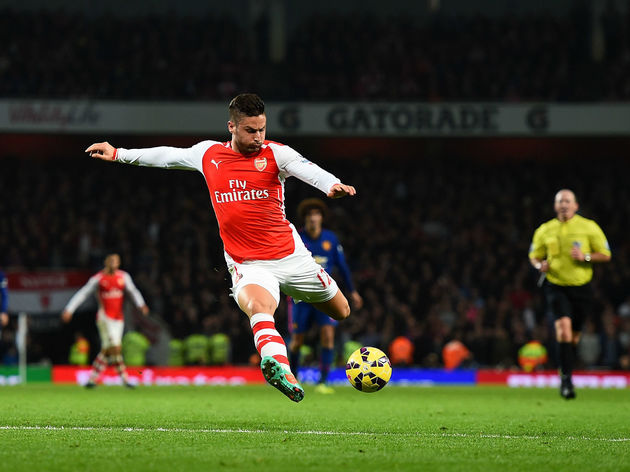 15 minutes after Giroud came on for ​Arsenal against Manchester United, the French striker – who has a tendency for an extravagant finish – ripped one past David de Gea for some consolation in the fifth minute of stoppage time to give the Gunners a more respectable 2-1 defeat at home.

It's fair to say Benteke's time on Merseyside didn't exactly go to plan. The Belgian frontman - who has scored seven goals against ​Liverpool in his career - only managed ten while playing for the Reds.

This effort at Old Trafford was spectacular but only brought the score back to 2-1 before Anthony Martial made sure United took home all three points just a couple of minutes later.

3⃣6⃣ today! #HBD to Fabio Quagliarella, who's on FIRE in Italy at the moment - he's scored in a record-equalling 11 consecutive #SerieA games #TBT to the 2010 #WorldCup, when he scored this delightful chip against Slovakia  pic.twitter.com/BdUs0iKwt9

Quagliarella, a Napoli player at the time, delicately chipped Slovakia’s Ján Mucha in the second minute of stoppage time in the final round of Group F games at the 2010 World Cup.

If they'd been 2-1 down at the time, instead of 3-1, it would've been enough to claim the point that would've put them through into the last 16. As it was, the defending champions finished bottom of the group and went home miserable.

Eric Cantona at his brilliant best for @ManUtd with *that* sublime chip #GoalOfTheDay pic.twitter.com/aop7tWRuqP

It's a goal every ​Premier League fan will know and, if not love because of club loyalties, at least have some begrudging respect for.

However, while this chip enjoys endless reruns, the scoreline gets very little airtime. As Cantona is cautiously embraced by Brian McClair, the Frenchman made it 5-0 in the 80th minute.

This iconic effort did little more than add to Sunderland's misery but its lack of importance on the day is overshadowed by the celebration as much as the finish.

Southampton’s greatest ever player was built for this list: No-one has scored more Premier League goals in defeats than Le Tissier, a player famous for memorable strikes.

The man who the St Mary’s faithful would christen Le God scored twice in the Saints’ 3-2 defeat to the eventual champions Blackburn. It was his second which we'll focus on though, when he lobbed his former teammate Tim Flowers from at least 30 yards to bring his side within one goal of a point - which they ultimately didn't get.

This strike won BBC’s goal of the season award, one of two that Le Tissier had nominated in that year’s competition but, as Flowers undoubtedly pointed out after the incident, it didn't mean squat.

Bale, unquestionably, takes the biscuit with his ​Champions League hat-trick against Inter.

It’s unlikely that there has been any other performance which has so definitively inspired the public to try and end another player’s career but Bale’s three (meaningless) goals earned as much praise for the Welshman as they did calls for Maicon’s retirement.

Bale scored all three of his near-identical (but spectacular) goals after Spurs went 4-0 down in the Champions League group stage away to Inter and while his hat-trick was impressive, it ultimately made no difference to the final result.