​So football has rightly been halted pretty much worldwide - barring ​Belarus, that is - due to the coronavirus pandemic.

And while most divisions will still be up for grabs when the beautiful game returns, the Premier League ain't such a competitive league, it turns out. So what kind of content is there for a football writer to create in such a time? Perhaps a massive list of the first, second and third placed teams in each Premier League season at the 29-game mark? That sound interesting or worthwhile?

I really hope so. Might be an idea to get a cup of tea, 'cos this is long - but worthwhile and entertaining, obviously. By matchweek 25 in 1992/93, Aston Villa had played 29 fixtures and were two points clear of Manchester United - who had a game in hand - at the top of the table. What a time to be alive, eh Villa fans?

Sadly the Birmingham-based side's form dropped off in the latter stages of the campaign, allowing the Red Devils to win the first ever edition of the Premier League by ten points, sitting pretty on 84 from 42 games.

Massive shoutout to Norwich, who finished third that season with a goal difference of minus four. Just look at ol' Roy there, all young and stuff.

Sir Alex Ferguson's side held a seven-point lead over Blackburn by the time they'd played 29 games and went on to retain the title, winning 27 of their 42 matches. 1994/95's title race went right down to the wire, with Alan Shearer and Chris Sutton's Blackburn matching Manchester United for much of the campaign.

Rovers were ahead by two points by the time the pair had played 29 games each. It went down to the final day as Blackburn confirmed their status as top flight champions despite losing to Liverpool, with Manchester United only able to muster a 1-1 draw at West Ham. The Magpies topped the table by the time they'd played 29 games, ahead of United on goal difference, and even had two matches in hand on their title rivals.

Sadly, the story is all too familiar for Newcastle. The Tyne and Wear club, who had been ten points clear at Christmas, lost to Liverpool 4-3 in April in an all-time Premier League classic and ended up four points off United. Oh look, Manchester United are top of the table again. Turns out they were really good in the 1990s.

Hot on their heels at the 29-game mark during the 1996/97 season were both Liverpool and Arsenal, but the pair dropped off and finished fourth and third respectively, allowing Newcastle to swoop in and end the campaign in second place - this time seven points adrift of United. Here, United were nine points clear of Liverpool. Liverpool didn't win a Premier League title during the 1990s, so I think you know how this one ends.

Aha! Gotcha! Arsenal, in their first full season under Arsene Wenger, put together a fabulous run in the second half on the campaign, which included 18 wins in a 21-game unbeaten streak, to pip United to the title by a point. Oh look, we're back to United being brilliant. What great fun for everyone.

Ferguson's side would win a Premier League, Champions League and FA Cup treble this season but were only ahead of reigning champs Arsenal by four points at the 29-game stage.

The final margin between the two sides would be just one point. Arsenal lost their penultimate game at Leeds, allowing United to swoop in and secure the title with a 2-1 victory against Tottenham on the final day. The new millennium! Y2J! I mean Y2K! Robots! The rise of the machines!

That's what United were back in the day. Title-winning robots built for the end of the wor- I mean built to win championships. That's what Roy Keane, David Beckham and co could do year on year.

By the 29-match point in 1999/00, United had built a four-point lead over Leeds - who would drop off as the Red Devils stormed to another title - finishing 18 points ahead of eventual runners-up Arsenal. 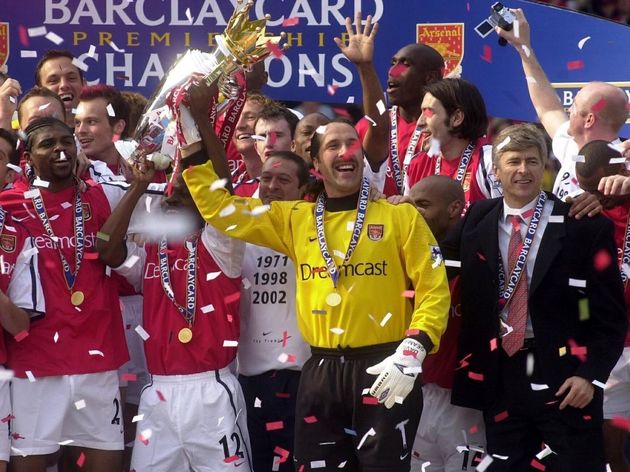 Oh, hello teams that aren't Arsenal or Manchester United! It's been a hot minute​, eh?

2004/05 saw Jose Mourinho and Chelsea shake up the Premier League like we hadn't seen since Blackburn's triumph, with the Blues cruising towards the title by the 29-game mark.

The west London outfit had a lead of 11 points over second-placed Manchester United, ultimately sealing the title with 95. The Special One worked his magic again during his second season at Stamford Bridge, his side once again the team to beat.

By the time Chelsea had played 29 games, they had a 15-point lead over nearest competitors Manchester United, with John Terry, Frank Lampard and Didier Drogba all enjoying starring roles. Ah, well it was fun while it lasted. Here are United again, being good and stuff. With Cristiano Ronaldo and Wayne Rooney in outrageous form back in the day, the Red Devils found themselves with a cushy six-point lead over Chelsea.

They kept that advantage over the Blues to secure their ninth Premier League title. They also went close in the FA Cup and Champions League but came up short in both competitions. ​Oh lawdy lawd. It looks like Arsenal are about to claim another Premier League title, which would be their fourth overall, surely preceding an expected era of dominance over the rest of the division.

What? We were spared? Oh thank goodness. So while the Gunners were two points ahead of United by the time they'd played 29 games, their rivals had a game in hand. United eventually topped the league with 87 points, just two ahead of Chelsea and four in front of Arsenal. One of Liverpool's Premier League near misses came in 2008/09, when Fernando Torres and Steven Gerrard inspired Rafa Benitez's Reds to second place.

By the time Manchester United had played 29 games they were only a point ahead of the Anfield side, but crucially had also played a match less. Ferguson's team ultimately proved too strong and extended their lead to four points by the conclusion of the season.

They also won the League Cup that campaign, but lost 2-0 to Pep Guardiola's Barcelona in the Champions League final. United's three-season run was halted by Chelsea - led by Carlo Ancelotti - in 2009/10 as Drogba (29) and Lampard (22) scored goals for fun at Stamford Bridge.

It was very much a three-horse race by the 29-game stage, with United leading both Chelsea and Arsenal at the summit by two points, though the Blues a game in hand.

Chelsea's 2-1 win at United in April was one of the key factors in the Blues pipping their rivals to the title as both teams finished the season strongly, with the London side wrapping the league up in style with a final day 8-0 victory against Wigan. As you've probably noticed, back when United were title challengers year in, year out, they always came back stronger whenever disappointment hit Old Trafford.

They proved to be the gold standard again in 2010/11 as the attacking quartet of Rooney, Dimitar Berbatov, Javier Hernandez and Nani led them to Premier League glory. Arsenal were only three points behind United with a game in hand by the 29-match stage but naturally fell away towards the end of campaign. “Aguerooo...I swear you’ll never see anything like this ever again."

Most people weren't watching their own teams on the final day of the 2011/12 season, such was the drama throughout the campaign.

The teams were neck and neck for much of the term, separated by just a point with 29 games played. Five or six years ago, it was a crime to write off a wounded Mourinho. Chelsea had been in the title hunt for much of the previous season - which was the current Tottenham manager's first in his second spell at Stamford Bridge.

However, no such late season slip materialised during the second campaign as the Blues charged to another title, with the tempestuous Diego Costa leading the line.

They held a six-point advantage over Manchester City with a match in hand with 29 games played, eventually winning the title by a margin of eight. It took quite a long time for people to accept Leicester as genuine title challengers in 2015/16, but when Claudio Ranieri's side started to squeeze out regular 1-0 wins around March and April the impossible looked more and more likely.

Thankfully for the Foxes they lacked a tried and tested title contender, with Tottenham doing their best to look formidable despite lagging five points behind their rivals at the 29-game mark.

Spurs slipped away as all top six sides were left to rue what might have been, with Leicester writing themselves into the history books with a ridiculously unexpected title triumph. Ah, well that feel-good story was nice while it lasted, eh? Back to the serial winners now.

​Chelsea had started their maiden campaign under Antonio Conte in inauspicious fashion, notably getting smashed 3-0 at Arsenal early on in the season.

However, in that very game the Italian boss switched to a formation consisting of three centre backs and two wing backs, which seemed revolutionary at the time. It wasn't really, but it definitely, definitely worked.

While Tottenham were good in what turned out to be their best ever Premier League season, a few too many draws left Mauricio Pochettino's side seven points adrift of Conte's by the time the pair had played 29 games each. That margin of victory remained intact, with Chelsea finishing on 93 points to Tottenham's 86. A fitting end for John Terry, who played a minimal role before departing for Aston Villa. After observing the room, so to speak, in his first season in England, Pep Guardiola and his City side made a ruthless assault on the Premier League in 2017/18.

Winning 25 of their first 29 games, the Citizens were so clearly better than anything else in the division at the time - even if their Champions League exit to Liverpool set up an intriguing rivalry between the two clubs for the next few years.

City eventually won the title by 19 points, ahead of Mourinho's Manchester United. Probably the least exciting 'exciting' title race in recent memory, Liverpool and City both kept winning during the second half of the 2018/19 season. The quality on show was incredible, yes, but fans held little hope for potential slip-ups when looking at their rivals' upcoming fixtures.

City were a point ahead of their Merseyside challengers with 29 games played. Both teams won their remaining nine games, meaning City finished on 98 points and Liverpool 97. And here we are. Football has been halted throughout the world due to the coronavirus pandemic.

And while this fast-spreading disease is absolutely more important than football, ​Liverpool fans understandably are hating the enforced inactivity, knowing their side need just two more victories from their final nine games to be crowned ​Premier League champions for the first time ever.

They're 25 points ahead of nearest challengers and current holders ​City, but it remains to be seen when football will return to our screens and stadiums around the world.