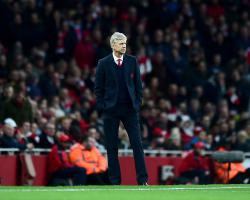 Arsene Wenger's side made it into Monday's draw courtesy of an Olivier Giroud hat-trick in a 3-0 win at Olympiacos on Wednesday night.

Going into the game having lost three of their previous five Group F fixtures, Arsenal were the outsiders as they needed to secure a two-goal victory or exactly match or better the 3-2 win the Greek champions achieved at the Emirates Stadium in September.

But Arsenal made light work of the challenge and Wenger hailed a "special night" for the club as they meticulously picked off Olympiacos at the right times while staying strong at the back.

Giroud struck with a first-half header before slotting home from a superb Joel Campbell pass after the interval and completed his hat-trick from the penalty spot.

The victory came despite Arsenal having seven first-team regulars sidelined through injury, although Walcott was starting his first game since recovering from a calf problem.

Zenit St Petersburg, managed by former Chelsea and Tottenham boss Andre Villas-Boas, Manchester United's conquerors Wolfsburg or the Spanish trio of Real Madrid, Barcelona and Atletico Madrid are the the quintet of clubs who could meet Wenger's men in the first knock-out stage.

But England forward Walcott believes Arsenal are a difficult proposition for any of those sides so long as they do not fall into the same trap which saw them eliminated by Monaco at the same stage last year.

"It doesn't matter who we play," he said

"I think if we contribute in the right way, we can beat anyone on our day, definitely

Hopefully if we can get players back fit as well, the squad will be even stronger than it is now

"Whoever we get, we need to respect them well

Against Monaco we didn't respect them at all.

"If we get the likes of Wolfsburg, we've played them in the Emirates Cup but it will be a completely different ball game

They had a very good result against United.

Whoever you get in the draw is going to be difficult.

It is just the way it is now

You've seen that in the Premier League - teams are getting so much better."

Walcott also praised the dressing room camaraderie and believes that can play a part in going further into the competition, with Arsenal having not made the quarter-finals since 2010.

He said: "The sort of attitude we had in the dressing room was 'never give up'.

"We never give up and you should have seen them buzzing right at the end in the dressing room.

"That is the spirit we want in this team

It is the spirit that we can push on and improve

Europe will have seen that performance and I think a lot of teams will want to avoid us now after that.

"We have got the character, the strength in depth to actually make upsets

Whoever we get in the draw, we will be confident, raring to go and I'm sure we will get players fit as well

The squad is very good."

In terms of his own fitness, Walcott admits he is still not back to his best having been out since picking up a calf injury early on in the 3-0 Capital One Cup defeat at Sheffield Wednesday.

Once I play a few more, I will be back to my normal self

It is nice the manager gave me an opportunity and I contributed well."