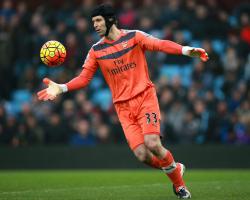 The Gunners' 2-0 win at Aston Villa on Sunday meant Cech has now kept 169 shut outs, level with David James, in the top flight.

Victory took Arsenal top of the table, although Leicester will replace them if they beat Chelsea at the King Power Stadium on Monday evening

And Walcott said four-time league winner Cech, who signed from Chelsea in the summer, has completely changed the Gunners at the back.

"From when we signed him, we all knew how good he was [after] what he achieved at Chelsea," Walcott told Arsenal Player

"On a personal level, for him it's great.

"He's changed us completely in that back four

He's a talker, he believes in us all.

He's very commanding, he's a leader in the dressing room as well, he always likes to talk."

Boss Arsene Wenger believes Giroud does not get the credit he deserves after his 50th league goal for the Gunners and Walcott thinks the France international is at the top of his game.

The England international continued: "It's not just his goals, it's his general play and everything about him.

"The way he holds the ball up, he blocks it and defends it, and he works hard from the team from defensive corners and everything.

"He's in great form at the moment

As soon as I won the penalty, I just knew that he would score.

You want players that are on form and he's definitely one of them."

He told the club's official website: "The second goal was disappointing, we look back and there was a lack of desire to get back which is unlike us

I'm sure the manager and players individually and collectively will address that."