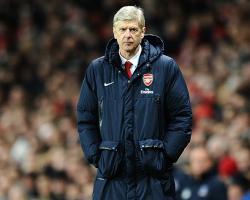 Blues boss Jose Mourinho responded to comments from Liverpool's Brendan Rodgers about being a "Chihuahua that runs in between the horses' legs" following their dramatic midweek win at Fulham, which cut the gap on the leaders down to four points, by insisting the Reds were in a "privileged position" because of not playing in the Champions League.

Manchester City boss Manuel Pellegrini has also been drawn into mind-games over swipes at his club's spending power as the pressure at the top of the table intensifies.

Wenger, though, does not intend to allow himself to be involved in anything else other than positive rhetoric about his team's championship chances.

Speaking ahead of Sunday's FA Cup fifth-round tie against Liverpool at the Emirates Stadium, Wenger said: "It (title race) is very open, only Chelsea can lose it because they are in front and all the other teams can win it."

Asked why every other manager says they are not contenders, Wenger responded: "It is (because of a) fear to fail."

Wenger maintains his only focus will be on making sure Arsenal can finish above their rivals come May.

That's as simple as that and that's how I see it.

"I say yes we are in it, yes we will have a go for it, we will absolutely give everything to go for it and if we don't I will take responsibility for it, but I just see it like that."

Wenger added: "We live in a league and in a country where we have one advantage - everybody can think what he wants, (but) it is very difficult when you're first in the league to distract people."

Arsenal were thumped 5-1 at Anfield in the Premier League last weekend - trailing 4-0 inside the opening 20 minutes - but responded with a goalless draw against Manchester United on Wednesday night.

Midfielder Santi Cazorla is doubtful this weekend because of illness, but Mathieu Flamini returns from a three-game suspension.

Wenger is expecting a much-improved display when they tackle Liverpool again, looking for a repeat of Arsenal's 2-0 home league win earlier this season.

The Arsenal manager said: "These guys are winners

When they lose in that way believe me they are hurt.