We've taken the liberty of removing any explicit language from the chant above. There's enough material below to offend Tottenham, so we thought we'd go easy. After all, Arsenal fans wouldn't want to ruffle any Spurs supporters' feathers!

If you've started reading this, and you're a Spurs fan, you probably won't really enjoy reliving the match that confirmed Arsenal as the Premier League's champions in 2004.

However, the Gunners arrived at White Hart Lane with the knowledge that a mere point would secure them their ​Premier League title. Even better, they could win it on their arch-rivals' own turf.

Spurs, by contrast, had the chance to delay the inevitable, but also do their best to derail their rivals' aspirations of going the entire season unbeaten. Well, that was a fun idea while it lasted. And ​Arsenal ensured it didn't last long.

The Gunners took the lead within the opening minutes, and did so in some style. Thierry Henry scampered away from several Spurs players before sliding an inch-perfect through-ball to Dennis Bergkamp. The Dutchman expertly laid it on a plate for captain Patrick Vieira to prod home.

​Tottenham could only watch as Arsenal yet again carved their defence apart in scintillating fashion to make it 2-0. Bergkamp was again the orchestrator, playing a defence-splitting pass that reached Vieira, who set up Robert Pires for an easy finish. Credit to Spurs, they battled until the very end, refusing to succumb to the harsh reality of their side's acute inferiority. Jamie Redknapp lashed an excellent effort past Lehmann around the hour mark, and Robbie Keane converted a late penalty to snatch a point at the death.

Rather hilariously, the home side celebrated the 2-2 draw as if they'd achieved something spectacular. Clearly, a home draw that handed their north London rivals the title on a silver platter, was a moment worth savouring.

In any case, Arsenal's league title was confirmed, and the celebrations that followed remain one of the great moments in the club's history. It doesn't get much better.

Perhaps it's just Arsenal fans, but is it not slightly difficult not to laugh at Tottenham's players dancing around, celebrating their equaliser as if they'd won a trophy? 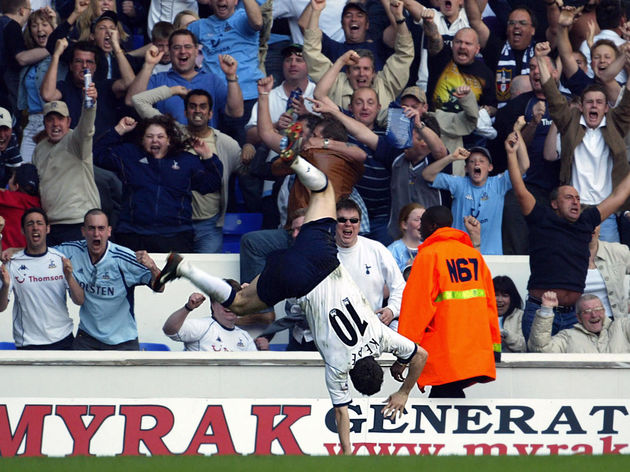 Yes, they'd fought back from 2-0 down against an excellent Arsenal side. But surely you'd be slightly conscious of your celebrations when you knew a draw would result in your greatest rivals the Premier League title?

Who knows, maybe Spurs were just over the moon with the point they claimed. To be fair, it helped them stay up that season, so good on you lads! 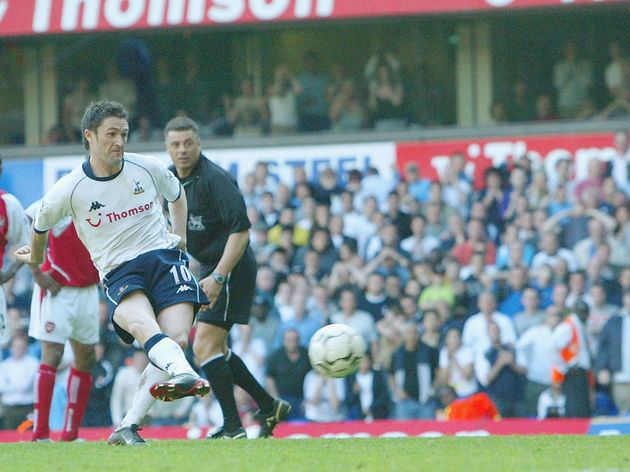 The Republic of Ireland international made a decent fist of it given his team were pretty much played off the park for the majority of the match.

Keane was involved in pretty much every attack that troubled the Arsenal defence, and his tireless work was rewarded after he earned a stoppage time penalty

He scored, he celebrated, and that was that. A solid performance slightly undermined by a result that wins your rivals' the league title!

16 years ago today, what a fun day out we had in Tottenham. #arsenal #invincibles pic.twitter.com/esYqryyced

Without a shadow of a doubt, Arsenal winning the league title at White Hart Lane will forever be a moment to savour. It was, after 1971, the second time they'd achieved such a feat, but the sight of Henry, Pirés, Vieira and co. gallivanting around having performed so exceptionally well throughout the entire season provided a truly timeless moment that will remain forever in the hearts of every Arsenal fan.

Obviously, a win would have proved a more emphatic way to do it, but the way in which the Gunners scored their goals perfectly represented what they'd been doing all season - immaculate, incisive, and quite simply glorious attacking football that no one in the country could match. Mr. Captain fantastic on the day. Not only did Vieira open the scoring after finishing off an exceptional attacking move, but he was part of the equally impressive second as he assisted Pires to make it 2-0.

A goal, an assist, and a typically dominant central midfield performance, this was a quintessentially commanding showing from the captain. For Vieira, it must have been a sweet, sweet moment.

Spurs' Mauricio Taricco's jubilant celebrations after Keane equalised. He had to be substituted after cramping up from celebrating too wildly. That's not aged well, has it?

To this day, the significance of this game's outcome remains unrivalled. Well, for Arsenal fans at least. You're unbeaten in the league so far, you score two classically brilliant goals, you watch on as Spurs celebrate a draw that eases relegation fears, and then you have a chance to share the experience of winning the league at your rivals' stadium in front of the opposition's fans and players.

Iconic, eternal, unprecedented, whatever you want to call it. This is a moment in history that will never be forgotten, it was just that perfect.

Forgive us for excluding any Arsenal's players in this section. We just feel it would be slightly disrespectful, even if you did, by some miracle, forget the name of one of Invincibles. What about some insignificant Spurs players then? It's always funny to remember Jamie Redknapp was a real life footballer, and that he hasn't been a SkySports pundit all his life.

Freddie Kanoute? As a French centre-forward, the guy must have struggled. Must have been quite the challenge living and breathing in the towering Henry-shaped shadow that loomed over you from the other side of north London. Well, with the title confirmed in such wonderful fashion, Arsenal lifted the trophy at Highbury on the final day against Leicester. A 2-1 win completed the historic feat of going an entire top flight league season unbeaten.

Spurs, on the other hand, successfully managed to avoid relegation. They won their final two fixtures of the season, and finished 14th. The less said about this season, the better we reckon, don't you Spurs fans?

Is there any better way to be crowned Premier League champions?

Will Spurs ever win the title (haha) at Arsenal? (No is the answer)