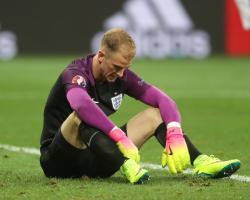 JOE HART fears his time at Manchester City is coming to an end with Pep Guardiola thought to be keen on signing Barcelona's Marc-Andre ter Stegen, the Daily Mirror writes.

SHKODRAN MUSTAFI has agreed personal terms with Arsenal, who are expected to pay Valencia upwards of ÃÂ£25million for the defender, according to the Guardian.

Everton are keen on Spain midfielder JUAN MATA, who appears to have no future at Manchester United, the Times reports.

West Brom are interested in a move for Liverpool's CHRISTIAN BENTEKE but would need to break their transfer record to complete a deal, according to the Guardian.

Everton manager Ronald Koeman has admitted the club may not be able to resist a Chelsea bid for ROMELU LUKAKU, the Evening Standard reports