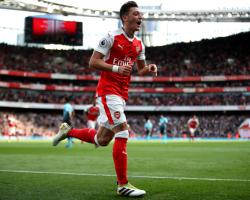 Arsenal manager ARSENE WENGER is prepared to splash the cash on a new contract for Mesut Ozil, reports the Mirror.

Middlesbrough striker JORDAN RHODES is Steve Bruce's number one target at Aston Villa, according to the Sun

Portugal international RUBEN NEVES, who played for Porto, could be the subject of a bidding war between Chelsea, Liverpool and Juventus according to reports in the Portuguese media