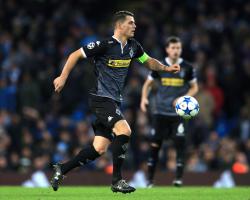 ALEXANDRE PATO is close to joining Chelsea, with the Barclays Premier League club closing in on an ÃÂ£8million deal for the Corinthians striker

The Daily Express report that talks are ongoing for the 26-year-old, with an initial loan deal still an option.

The Serbian is out of contract after leaving Inter Milan and Villa boss Remi Garde wants his experience to bolster his side's fight against the drop.

Arsenal are primed to splash the cash on Switzerland international GRANIT XHAKA, according to the Daily Star

The Borussia Monchengladbach forward is expected to cost the Gunners up to ÃÂ£37million in the summer.

The Guardian Series report that the 33-year-old has been appointed by the Sky Bet League Two club as Ian Hendon's successor.

The wantaway West Brom striker is thought to prefer a move to Tottenham, though the Daily Mirror report that the Baggies would prefer to sell him to Newcastle in a ÃÂ£15million deal.