Tributes roll in for retired Henry 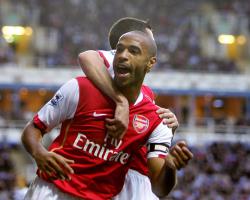 Henry will always be most closely associated with Arsenal, where he is the all-time highest goalscorer with 228 goals in 377 games across two different spells

His time at the club included winning the Premier League title twice with the Gunners, as well as the FA Cup three times.

Arsenal paid tribute to Henry with a link on the home page of their website www.arsenal.com with a 45-page gallery highlighting his incredible career with the Barclays Premier League club, entitled "Pictures: Thierry Henry's best moments"

Arsenal manager Arsene Wenger, who had known him as a young player at Monaco, signed him from Juventus for ÃÂ£11million in 1999, and immediately shifted him from the wing to a central striking position

Henry left Arsenal in 2007 and joined Barcelona, where he won the Champions League in 2009

His blend of pace and power made him one of the most feared forwards in English football, and former Liverpool and England defender Jamie Carragher, who came up against the fearless forward on numerous occasions during his career, admitted life against Henry was tough.

"Defenders everywhere will be breathing a sigh of relief that he has hung his boots up," Carragher, whom Henry will join as a Sky Sports pundit, said.

"He was certainly the toughest opponent I ever faced and possibly the best player the Premier League has seen.

"I would have loved him to be on the same team as me during my playing career, I'm delighted we're finally on the same side."

Henry spent the final five years of his playing career with the New York Red Bulls, returning to Arsenal to make four appearances on loan in early 2012

Another player he came up against whilst in England on the field, who he will also work alongside in his new career, is another ex-rival in former Manchester United captain Gary Neville.

He said: "We were blessed in this country to see Thierry playing at his peak, potentially one of the greatest players in the world and even if you supported another team you couldn't help but enjoy watching him play

"It's always a shame when such a career comes to an end, but it's very much Sky Sports' gain and I look forward to working with him."

Former Reds midfielder Jamie Redknapp, who played at north London rivals Tottenham while Henry was at the Gunners, said: "I know from playing against Thierry how good a player he was and Sky Sports viewers are in for a treat

"His game was built around incredible pace, power and finishing, not to mention the ability to read the game better than most

His views will be fascinating and I can't wait to work alongside him."

After the Gunners linked the announcement on their Twitter feed just after 7am, they posted some photographs marking some of the highlights in Henry's glittering career at the club.

That was before they posted a message asking for former players and fans alike to post their thoughts on the Frenchman's retirement with the hashtag #KingHenry, which was re-tweeted over 900 times in the next three hours.

Their tweet read: " What's your reaction to the news of @ThierryHenry's retirement? Post your messages using #KingHenry"

BBC pundit Gary Lineker, a former striker at White Hart Lane, commented on Henry's decision on Twitter with a message, saying: "Congratulations to @ThierryHenry on a truly wonderful career

Tottenham goalkeeper Brad Friedel wished him luck as he tweeted: "@ThierryHenry congratulations on an amazing career...one of the best I've faced over the last 23 years! Good luck with ur next adventure!"

Barcelona also honoured their former player with a short article detailing his career at the Catalan club, ending poignantly with "Merci, Henry".

Meanwhile, French national newspaper L'Equipe is running a poll to determine where Henry should be ranked in their list of the nation's greatest ever players.

After just over 30,000 votes, 23 per cent think he is third while one in five people have placed him fifth.

Only four per cent of voters believe he is outside the top 15.

Henry was ranked 15th in an identical poll conducted by bi-weekly magazine France Football in 2004.

As the tributes continued to pour in for Henry, Gunners midfielder Theo Walcott, who made his debut for the north London club a year before Henry departed the first time, said he was truly inspired by his former team-mate.

England winger Walcott posted a photograph of himself with Henry from their playing days together below a tweet, which read: "A true inspiration to me in my career

Thank you @Thierryhenry & good luck in your new path with @skysports"

Sky Sports pundit Chris Kamara, who will work alongside Henry when he takes up his position next year, tweeted: "Seen on @SkySportsNewsHQ Arsene Wenger's best ever signing @ThierryHenry officially retired, thanks for the memories"

Gunners and Germany midfielder Mesut Ozil posted a fitting tribute as he took to Twitter to say: "Once you enchanted all of us - now I can only say: Thanks for everything! @ThierryHenry #ArsenalLegend"