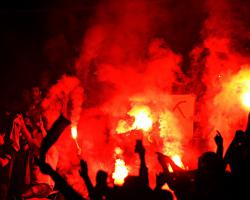 The London club were charged with "insufficient organisation (lack of body searching)" after fireworks and missiles were thrown on to the Emirates Stadium pitch during a 4-1 home win on October 1.

A statement published by European football's governing body on Monday confirmed disciplinary proceedings against Arsenal had been closed, while Galatasaray have been fined 50,000 euros (Â£39,570).

The statement added: "The Turkish team have also been ordered to contact Arsenal FC within 30 days for the settlement of the damages caused by its supporters."

At the Emirates, several flares were thrown onto the pitch from the section where the 3,000-strong travelling Galatasaray supporters were located towards the end of the first half, causing the Group D match to be briefly halted.

Metropolitan Police confirmed there had been six arrests as part of their operation for the European tie, two of which were for entering the ground with flares.

UEFA views it as the home side's responsibility to search supporters for any illegal items before they come into the stadium.

There were disturbances before the match, when Galatasaray fans had let off flares in streets around Finsbury Park and thrown some into the Tollington Arms pub.

A strong police presence was on hand, including officers in riot gear and with dogs, while Arsenal stewards conducted searches of bags on the turnstiles, when half-a-dozen flares and fireworks were confiscated, although some were able to be smuggled in by Turkish supporters.

Arsenal reported damage to around 100 seats in the away end.

Also punished by UEFA on Monday evening were Swiss club Basle, who have been fined 40,000 euros (Â£31,640) after objects were thrown by home fans during their 1-0 Champion League victory over Liverpool at St Jakob-Park on October 1.

The Andorran Football Federation has been fined 10,000 euros (Â£7,920) and the Football Association of Wales 5,000 euros (Â£3,960) after visiting fans invaded the Andorra la Vella pitch on September 9.

Gareth Bale's late winner in a 2-1 European Championship qualifying victory for Chris Coleman's side sparked the invasion and, while the visiting federation has been duly sanctioned, the Andorran governing body has received the heavier punishment due to "insufficient organisation".