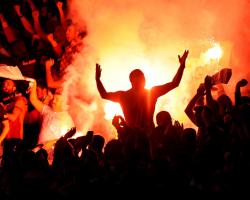 Several flares were thrown onto the pitch from the section where the 3,000-strong travelling Galatasaray supporters were located towards the end of the first half at the Emirates Stadium, causing the Group D match against Arsenal to be briefly halted.

At St Jakob Park, a battery appeared to be thrown in the direction of the assistant referee near to the Basle goal during the tie with Liverpool, while at Anderlecht's stadium, flares were lit in the area housing travelling Borussia Dortmund fans.

If found guilty, the clubs could be hit by a fine from the European governing body, or be ordered to play matches behind close doors.

All three cases will be dealt by the UEFA Control, Ethics and Disciplinary Body on October 16.