​Arsenal manager Unai Emery is unsure if Aaron Ramsey will play for the club again after limping off in the Gunners' 1-0 win at Napoli in the second leg of their Europa League quarter-final.

Ramsey, who has already agreed to join Juventus in the summer on a free transfer, now faces a race against time to play a part in his current side's end of season run after suffering hamstring damage. 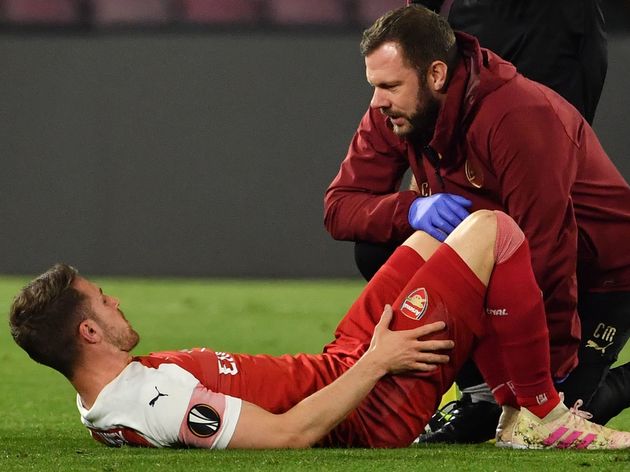 The Welshman has been in fine form this season, and his absence will be a major miss for Emery as Arsenal still face a battle for a top four spot in the Premier League, while also facing Valencia in a European semi-final.

“I don’t know,” Emery said in his post match press conference, as reported by The Guardian, adding:

“It is a muscular injury. Normally it is some weeks outside the team. He was in a very good moment, with big behaviour and commitment to do something important.

"His injury today can give us some matches without him."

The Spaniard confirmed that the midfielder would definitely miss both legs against the La Liga outfit.

Ramsey's injury was the only blight on an otherwise outstanding evening for the north London side, as they breezed past a team who will almost certainly finish runners-up in Serie A. Arsenal controlled the game and started on the front foot, and when Alexandre Lacazette scored a sensational 25-yard free kick, the tie was all but done.

“I am very proud of my players and of our work,” Emery said.

We never feel alone, but we are looking forward to seeing you all at the Emirates on Sunday! We are the @Arsenal ! Forward together! pic.twitter.com/rS0mPYPrBT

“We show the players have the habit to play matches against good teams, in a good atmosphere, and show big personality.

“I don’t know if it’s our best performance but it is good after our victory on Monday in Watford. To repeat that against Napoli