Unai Emery is attempting to assert his authority at Arsenal, claiming that Alexandre Lacazette needs to accept the rotation with Pierre-Emerick Aubameyang.

Lacazette was brought off for Aubameyang in the north London derby on Saturday, however the substitution was not rewarded as the Gabonese striker went on to miss a late penalty which cost Arsenal the victory.

The Frenchman was vocal in his displeasure when he was substituted against Tottenhamthis weekend, as he had just missed a gilt-edged chance to put Arsenal ahead, but Emery has come out to defend his decision to make the change. 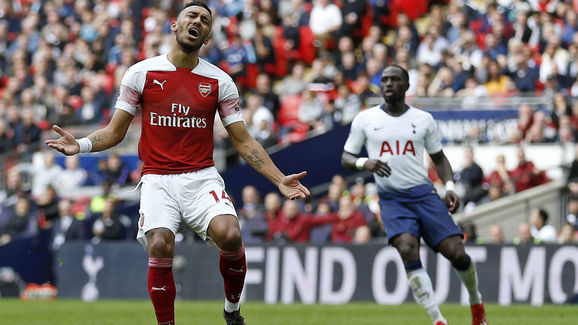 "Sometimes I am not happy with them both when their performances are not good when they’re both playing, but I am very consistent in our work to take the best decision and to give them the best performance for us, whether they’re playing together or alone.

"For example, next match it is not possible to play both because of the red card in Europe for  Lacazette. I can only play Aubameyang."

He replaces Lacazette - let's get this, @Aubameyang7 

Aubameyangis Arsenal'stop scorer in the league this season, with Emery clearly not favouring playing both strikers on the pitch at once.

The Gabonese striker has found the net 16 times in the Premier League compared to Lacazette's 12 strikes this campaign.

Emery has been criticised in the past for his lack of authority at PSG, after Neymar memorably took over penalty duties from Edinson Cavani, and the manager failed to gain control over his players before the matter escalated.