​Arsenal manager Unai Emery wants to sell Mesut Ozil in January in order to free up transfer funds which can be used to improve other areas of his squad.

Despite reports suggesting that he had recovered from an injury, Ozil was left out of Arsenal's squad to face West Ham on Saturday, leading to further questions about the German's future at the Emirates Stadium.

The Daily Mail claims that Emery's trust in Ozil is now 'non-existent' and he wants to sell the 30-year-old, but there is yet to be evidence of credible interest in Ozil, whose £350,000-a-week contract is a strong deterrent. The sale of Ozil would help ​Arsenal to complete the signing of Denis Suarez from ​Barcelona. A loan move is on the cards but Barcelona want guarantees of Arsenal making the deal permanent at the end of the season, which they are reluctant to promise.

Emery played down the significance of his selection decisions on Saturday, insisting that Ozil was simply being treated like any other player.

"For me he is like any other player," said the Arsenal boss. 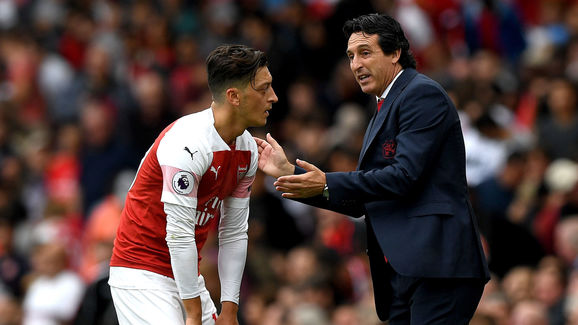 "The players who were here were the ones who deserved to be at this match. Sometimes he is helping us, at other moments not helping us because of injury or because maybe the match is not for him."

If the decision to leave out Ozil was indeed tactical, this is not the first time Emery has made such a call this season. He cited 'physicality and intensity' as his reasons for keeping Ozil on the bench against Bournemouth in November.

Arsenal lost 1-0 to West Ham on Saturday, failing to score in a Premier League match for the first time since the opening day of the season and they appeared bereft of attacking creativity.