Arsenal manager Unai Emery has revealed his delight at having so many attacking options in his squad following their 1-0 win over Newcastle United, adding that he expects his new signings to fight for places in the first team in the near future.

In what was a rather underwhelming affair, a second-half goal from Pierre-Emerick Aubameyang was enough to win the game for the Gunners, but most of the excitement came with Nicolas Pepe's brief debut in the closing stages of the game.

Speaking in his post-match press conference (via the club's o​fficial website), Emery confessed he was incredibly impressed with the impact of his attackers, adding that he hopes to have all his options available soon.

He said: "I want to win, I want to score and I want to do a clean sheet. Today we won and we did that. The balance offensively and defensively is only taken with the victory. Today, I think, in our 90 minutes we could do that with taking the match very seriously, being very compact and controlling the game with the ball.

"We want to start defending with Aubameyang and we want to start attacking with Bernd Leno. We need to create good combinations, good situations, to create chances and after each player has his quality to score, to do the pass, the assist and to do the job defensively. 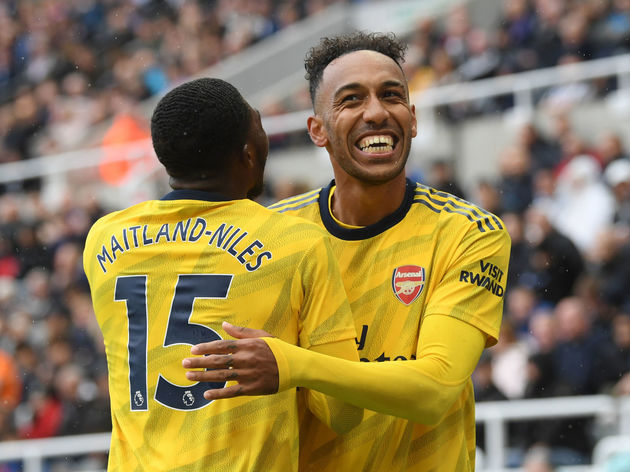 None of Emery's new signings started the game, with Dani Ceballos and Gabriel Martinelli both coming off the bench alongside Pepe in the second half, and Emery confessed he did not want to rush them into action.

"David Luiz did pre-season with another team and he is okay to play physically but he only trained completely with us yesterday. On Friday he did 30 minutes with us. I was thinking to give them confidence to work together because they were working well together, Sokratis and Chambers," Emery added. "Nicolas Pepe came one week ago and physically he needs to get his best fitness to be ready to play 100 per cent for 90 minutes.

"I think that today 20 minutes is good for him. And Ceballos is in the middle because he came before Pepe but he got an injury and he stopped training. But he needs to know the ​Premier League, so today was important for him and for us."