Arsenal trail 1-0 to Belarusian champions BATE Borisov after the first leg of the last 32 tie last week and Emery has called on fans to play a big part in mounting an aggregate comeback. 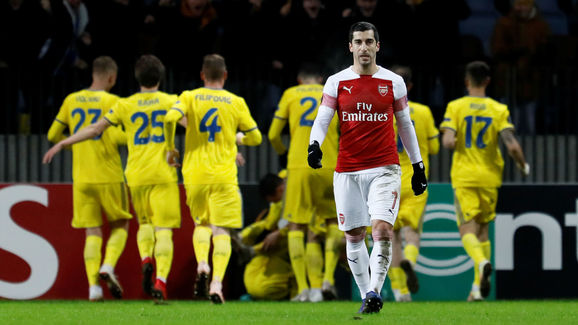 "For us it is a very important match, after the first result we must manage the 90 minutes and also know if we need more minutes after the 90 minutes it can be in our mind with the preparation to do that," the Spaniard told the press, via Arsenal.com.

"It is also very important to play in our stadium with our supporters, and we need their support for this match and I hope there is a big atmosphere for us. Together, with their support, I know our players can play and give their all," he added.

"I don't know [if the kick-off time will affect the atmosphere], but we want and we need the supporters. If we can create a big atmosphere, then it is very important." The game will commence at 17.55 (GMT) and the Arsenal Supporters Trust has warned that the early kick-off may result in fans travelling to the game from work from across London and beyond will be unable to reach the stadium in time, potentially resulting in empty seats.

A ​letter from the group to UEFA president Aleksander Ceferin criticising the role of television companies 'dictating' kick-off times and demanding an explanation, read: "This is a totally unacceptable and inconvenient kick off time for a vast number of Arsenal fans who have to travel to the game after work from across London, the South East and further afield.

️ Want a behind-the-scenes look at our #UEL training?

Then make sure you check these out 

"The result will be a huge number of empty seats and many fans having to pay for a ticket on their season tickets which they cannot use. This is both unfair on Arsenal supporters and will lead to a poor atmosphere in the stadium."