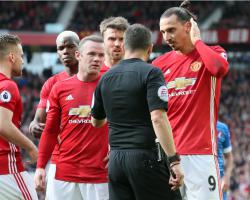 Taylor is to take charge of Arsenal's clash with non-League Lincoln at the Emirates Stadium, with Friend taking up the fourth official role earlier in the day when Middlesbrough host Manchester City.

The pair have come in for criticism in relation to incidents in Premier League games they refereed on Saturday.

Taylor awarded a penalty to Burnley for handball during their 3-2 defeat at Swansea when the offender was Clarets striker Sam Vokes.

Friend did not see two incidents in Manchester United's 1-1 draw with Bournemouth that have led to Football Association charges of alleged violent conduct - Tyrone Mings' boot landing on the head of Zlatan Ibrahimovic and the Swede's elbow striking the defender in the face.

It understood they both received permission to go from the Professional Game Match Officials Limited and returned to the UK early last week.