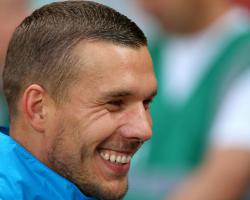 "I am a footballer through and through, I'm a street footballer and I love the competition," Podolski, who is under contract at Arsenal until 2016, told broadcaster RTL.

"When I don't have that competition every weekend, there must be a change.

"We'll see (about a possible January transfer), but I have to at least give it a thought."

The 29-year-old was an unused substitute when the Gunners beat Galatasaray 4-1 on Wednesday in the Champions League.

Podolski spent most of Germany's the World Cup-winning campaign in Brazil on the benchand has made only brief appearances in the English Premier League this season.

In four appearances for the Gunners, he has accrued only 128 minutes so far this season.

Italian sides Juventus and Napoli were reportedly interested in signing the German before the start of the season, but Arsenal boss Arsene Wenger opted to keep the versatile midfielder, who can play wide or up front.

Podolski, who has won 118 caps for his country, says he does not believe his lack of matches for Arsenal will hamper his chances of starting for Germany in their Euro 2016 qualifying campaign.

"I've been involved in the team for a long time and have already had phases when I haven't played so much at other clubs and still been in the team, so it's not a problem," he added.

Germany coach Joachim Loew has included Podolski in his squad for matches against Poland in Warsaw on October 11 and Ireland in Gelsenkirchen three days later.