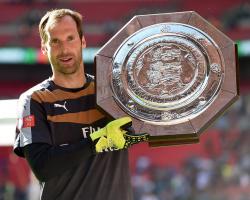 The Gunners beat Chelsea to win the FA Community Shield at Wembley last weekend, and will begin their challenge for the 2015/16 Barclays Premier League at home to West Ham on Sunday.

Manager Arsene Wenger moved to strengthen the squad with the ÃÂ£10million summer addition of veteran goalkeeper Petr Cech, and Arsenal continue to be linked with a big-money bid for Real Madrid's France international forward Karim Benzema.

Usmanov, whose Red & White Holdings group own just over 30 per cent of the club's parent company, believes should Wenger bring in another top target, then he would have assembled a squad capable of challenging the best across Europe.

"If there aren't (any) severe injuries, he's got a great chance to compete with teams like Chelsea, Manchester United and Manchester City

The championship will be decided between these four teams," Usmanov said in an interview with CNN

"With the team that Arsene has put together, except for one position, I think it's a club that's ready to successfully fight for European cups."

While Real Madrid coach Rafa Benitez intends to keep Benzema as part of his plans for next season, it appears the 27-year-old - who did not travel with the Spanish side to the Audi Cup in Munich - looks set to be on the periphery of the team led by Cristiano Ronaldo and Wales forward Gareth Bale

Arsenal, though, would have to again dig deep into the Emirates Stadium reserves , with Benzema likely to command a fee of around ÃÂ£40million, not to mention his hefty wage packet which would be expected to put him among the top earners at the club

Following improved transfer activity in recent seasons, with the purchases of Mesut Ozil and Alexis Sanchez, Wenger has received the backing of the Arsenal Supporters Trust in a member's survey

Usmanov, yet to be included on the Arsenal board, believes the 65-year-old Frenchman put his own reputation on the line to help the club move forwards with relocation from Highbury in 2006, which saw almost a decade pass before successive FA Cup triumphs

"Arsene had a very, very difficult position when club shareholders didn't want to put their money into constructing the new stadium, a nd because of this he lost five years, maybe the best of his career, without a trophy

"If I had the right, I would keep Arsene until he wants because until he cannot perform his activity as a manager, it is a gift for any club to have a coach like Arsene Wenger."