Has Arsenal’s new manager bounce ended before it started?

It certainly seemed so after the first 45 minutes of Monday night’s match against Leeds.

Supporters at the Emirates saw their team totally outplayed to the tune of Leeds' 15 shots and 63% possession to Arsenal’s three shots and 37% possession. The Gunners' response was certainly not bad. Had the Arteta 'hairdryer' treatment engineered this major upturn in play? Don’t go anointing Mikel as the second coming yet. We’ve seen this before with ​Arsenal in a mirror image game a few weeks ago, it just ended with a different result.

Arsenal hosted ​Brighton back on 5 December last year. Almost identical circumstances occurred in the first half to Monday night's game. Arsenal, playing at home, to a team they are much fancied against.

Arsenal end the half having been totally outplayed. They’re unable to keep the ball under a high press, giving away more of the possession and conceding plenty of chances to Brighton. The second half commences with plenty of blood and thunder from the home team, a carbon copy of last night.

The crowd sees an immediate response with ​Alexandre Lacazette scoring from a corner within the opening five minutes. Ultimately, Brighton soak up this pressure and hit Arsenal on the counter, with Neal Maupay sealing a win for the seagulls in north London. The second half offered much for the Yorkshire side. If ​Leeds’ Jack Harrison, streaking away down the left wing, had produced more quality, what would we be discussing? If Barry Douglas’ set pieces had been played into the box rather than speculative efforts at goal, would we be mentioning a transformative team talk from the new boss?

Leeds deserved the same result that Brighton managed at the Emirates on Monday, but lacked a cutting edge and a slice of fortune. Leeds’ possession and patterns of play to break the Arsenal press was excellent. You could argue that Leeds had better chances than Brighton, just on this night they were unable to convert. While the feel-good narrative regarding Mikel Arteta’s appointment can continue, the reality is that this squad has serious deficiencies and whomever is manager will suffer.

One blindingly obvious recurrent theme is that Arsenal are unable to deal with the high press this season. Their interplay through the lines isn’t cohesive enough and they outright don’t do it.

Watching Leeds’ Kalvin Phillips, Barry Douglas and Robbie Gotts regularly beat Arsenal’s press with lovely exchanges of passes speaks volumes about the application and quality of the current Arsenal squad. Those that remember the glory years at Arsenal will be stunned to see how inept the team is with the ball. 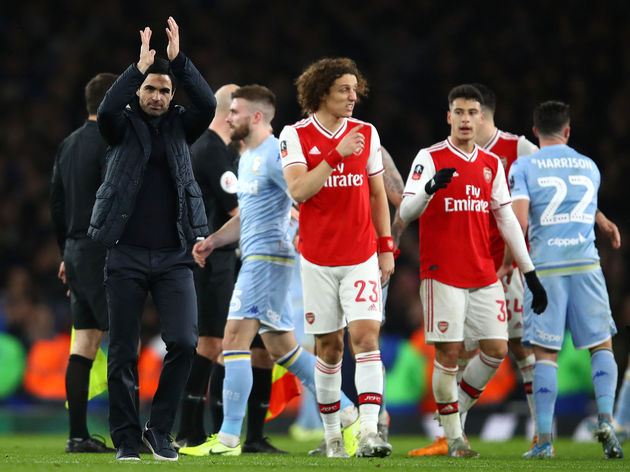 This Arsenal team finds it incredibly difficult to create chances, relying on set pieces (only behind Bournemouth with nine set-piece goals in the Premier League) or winning the ball in the opposition half (Arsenal’s 16 goals from open play ranks 12th).

Monday night’s game was won on emotion, however, in professional sports, you cannot consistently win like this. Quality individuals and a system of play are what allow you to win.