Vivianne Miedema: The Record-Breaking Striker Who Shies Away from the Spotlight

On Wednesday evening, Arsenal Women beat Slavia Prague 5-2 to all but book their place in the quarter-finals of the Champions League.

It was the perfect response to suffering their first league defeat in nine months against Chelsea on Sunday.

At the heart of the victory was a 23-year-old Dutch striker with the world at her feet.

Vivianne Miedema hit a hat-trick in 39 minutes, before adding a fourth in the second half. All in a day's work for a player who became the Netherlands' all-time leading goalscorer at the age of just 22.

Miedema makes a habit of sending records tumbling. During the 2018/19 season, she scored 22 goals in 20 games to finish as the top scorer in the WSL – nobody else had managed more than 15 goals in a single campaign prior to Miedema's mammoth effort (although in fairness, Nikita Parris hit 19 last season too.)

The Dutch striker has experienced a meteoric rise to stardom, She was playing in the Eredivisie Vrowen - the top tier of women's football in the Netherlands - at 15, and scored 39 goals in a single season at 18.

This prompted Bayern Munich to come calling and, despite not speaking a word of German, Miedema jumped at the opportunity. She spent three fruitful seasons playing in what was at the time the best women's league in the world. There was really only one club that could tempt her away.

Miedema grew up as a Feyenoord fan, and idolised Robin van Persie. There are flashes of the former Dutch striker in Miedema's game; the goal poaching instinct, the intelligent movement inside the area, the exquisite run timing – expect Miedema to go grey by 30 too, at this rate of similarity.

When Van Persie's former club ​Arsenal showed an interest, Miedema had no hesitation in following in her hero's footsteps.

Miedema has thrived since moving to the WSL. While the Frauen-Bundesliga is a physical, long ball style league, the more ball playing side to English football has enabled Miedema to show off her supreme technical ability.

Standing at just over 5'7, Miedema is one of the taller players in the women's game. But saying she has "good feet for a big man" doesn't do her justice. Firstly, because she's female. Secondly, because this football cliche conjures up images of Peter Crouch, who was just...basically alright with the ball at his feet despite his gangly demeanour. Miedema has phenomenal feet. Inside the box, she is mesmerising.

The Arsenal striker can be surrounded by several defenders, yet with the ball seemingly glued to her feet, she will send the opposition one way and then the other to create an inch of space, before finishing with aplomb.

What sets her apart is her natural goalscorer's instinct. This comes from her intelligence; she knows exactly when to take the shot on first time, when to round the goalkeeper and when to utilise her quick feet. 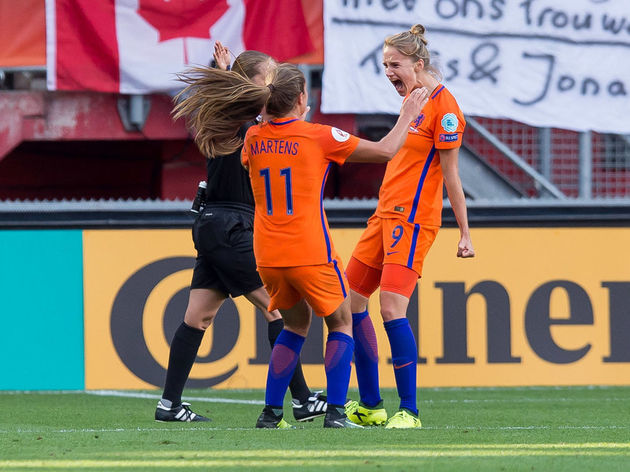 Thanks to this remarkable composure, it is little surprise that Miedema boasts such a prolific strike rate for club and country. She hit three goals in France as Holland reached the World Cup final, and scored twice in the Euro 2017 final as the Netherlands' electric forward line blew Denmark away.

Miedema currently has 65 goals in 85 appearances for her country. Although Abbie Wambach's record of 185 international goals seems a long way away right now, Miedema surely has at least another 10 years of scoring for Holland ahead of her. At the rate she is going, that record could one day be hers.

But the unique thing about the Arsenal striker is that she is not motivated by individual records and awards. ​scathing assessment