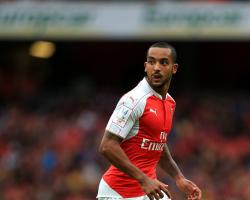 Walcott has completed a new four-year deal that will keep him at the Emirates Stadium past his 30th birthday, with Spaniard Cazorla also finalising fresh terms with the Gunners.

Arsenal face Chelsea in Sunday's Community Shield at Wembley, with Walcott in the running to lead Arsene Wenger's attack against Jose Mourinho's Blues.

"We're delighted to have extended the contracts of Santi and Theo," said Arsenal boss Wenger.

"Both are top-quality players who are hugely important and influential to our squad.

"As well as their huge contributions on the pitch, they both have a great deal of experience and are very popular off the pitch.

"We're very pleased with them both signing contract extensions, as it provides our squad with further stability of quality."

Spain midfielder Cazorla has racked up 148 appearances for Arsenal since moving to London from Malaga in 2012.

Arsenal's only major piece of transfer business this summer has been to sign goalkeeper Petr Cech from Chelsea for ÃÂ£10million, though boss Wenger has not ruled out further improving his squad before the start of the Premier League campaign.