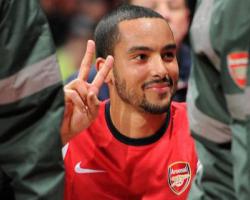 Arsenal won 2-0 and, when the England international was being stretchered off after sustaining a knee injury, he was carried in front of the travelling Spurs fans, with some seemingly throwing coins and plastic bottles towards the 24-year-old.

Walcott responded by raising both his hands in a '2-0' gesture, with Gunners' boss Arsene Wenger defending the 'non-offensive' incident after the game.

Press Association Sport understands it is unlikely the FA will dish out retrospective punishment to Walcott, with Wenger suggesting the gesture was 'an action that didn't offend anybody'.

"The doctors said to me that the coins had been raining over his [Walcott's] head and they had to protect him, maybe that is why he did that. Yes [the coins came before the gesture] that is what I have been told," he said following the win which sees Arsenal progress into round four.

Spurs manager Tim Sherwood did not witness the gesture as it happened but, after being informed of the situation, said it 'could have been a bit of banter'.

If Walcott is punished by the FA it would be the second time in the last month that an Arsenal player has been charged in relation to gestures made towards opposing fans.

Jack Wilshere received a two-match ban for aiming an obscene finger gesture at Manchester City supporters in Arsenal's 6-3 defeat at the Etihad Stadium on December 14 but, with Walcott's incident of a less-inflammatory nature, it seems similar retrospective punishment is unlikely.