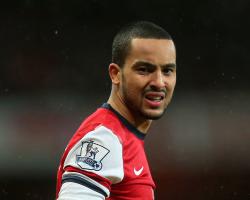 The Gunners returned to the top of the Barclays Premier League table, one point ahead of Manchester City, after a late double salvo secured a 2-0 victory over Cardiff at the Emirates Stadium on New Year's Day.

This weekend, though, will be all about the magic of the FA Cup as the top-flight clubs enter the world's oldest knockout competition, with the north London derby set for the primetime TV slot on late Saturday afternoon.

Spurs may have found some form under new boss Tim Sherwood to record a hard-earned 2-1 win at Manchester United on Wednesday, but Walcott maintains tackling the league leaders on their own ground will be a whole different ball game.

"I think it is going to be a bad time to play us as well. For the neutrals it is going to be a very interesting battle," said Walcott, whose well-executed chip in stoppage-time helped seal victory against Cardiff after Nicklas Bendtner's 88th-minute goal had finally broken the visitors' determined resistance.

"The FA Cup is always special, for me, being English as well. I love the FA Cup.

"I can't call it. It is one of those games that is going to be very open.

"Tottenham, since their new (managerial) appointment, have done very well to be fair to them but, like I say, they won't want to play us.

"It is at the Emirates - we are trying to make our stadium into a fortress and we are starting to do that."

Arsenal beat Tottenham 1-0 at home in September and Walcott is relishing the prospect of another north London derby.

"Every time Tottenham come here or we go there, you want to put 100 per cent in and more if you can," the England forward said.

"These are massive games, the games everyone wants to be part of. We have got to be right up for Tottenham and I can't wait for that game at all."

Walcott feels togetherness has been key to Arsenal's progress this season.

"Everyone trusts each other and when you have that you are going to build on that and go from strength to strength," he said.

Walcott's goal against Cardiff was a fifth in as many appearances, the pacy forward now back to full fitness since his return to the side following an abductor muscle injury which needed minor surgery.

"I missed so many games since the start of the season it has been so frustrating, but I would rather that injury happened at the start than come the end or the middle of the season.

"I am just going from strength to strength. It is nice to be back and enjoying my football."

Bendtner suffered an ankle injury in the process of scoring on Wednesday, when Cardiff goalkeeper David Marshall caught him trying to make a save at point-blank range, and is set for a scan to determine the extent of the ligament damage.

Lead frontman Olivier Giroud is also troubled by his own ankle problem but could return to face Spurs along with German playmaker Mesut Ozil, who has been out with a shoulder injury.

Fit-again German forward Lukas Podolski looked rusty against Cardiff when deployed in a central position but may well be given another chance against Spurs.