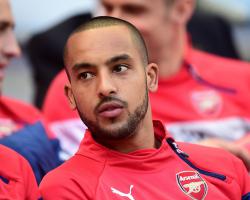 The Gunners' slim hopes of overhauling Chelsea's 10-point lead at the top of the Barclays Premier League were all but extinguished following a goalless draw at the Emirates Stadium on Sunday.

Walcott watched on from the bench again before a late substitute appearance, with the forward's last club start having been back in March.

The 26-year-old - who recovered from a serious knee injury last season, but has yet to agree a new long-term deal - feels such strength in depth can only be positive for the squad, if sometimes frustrating for individuals.

It makes it a bit more difficult for people to get into the team," Walcott said, quoted on the club's official website, www.arsenal.com.

"I think, especially this season, not many people thought we would be challenging for the Premier League.

"In this calendar year, we have been the best team in Europe.

"It is the strongest the squad has been and everyone is staying fit as well.

"There aren't many injuries in the squad, which is important

If we had an injury-free season, I think we could lift the title."

Arsenal head to Hull on Bank Holiday Monday looking to keep pressure on Manchester City in the race for second place, and with it automatic qualification for next season's Champions League.

Captain Mikel Arteta is set to step up his training this week after an ankle problem hampered recovery from a calf injury, while midfielder Alex Oxlade-Chamberlain is another continuing rehabilitation from an inflamed groin which has seen him out since the FA Cup win at Manchester United last month.